A look at the key differences between biz ops roles in start ups vs. big tech

When you join a BizOps team, you're joining a group of folks that have a common purpose.

This purpose (or objective) is to drive the people in an organization to achieve their goals, and therefore to drive the organization to succeed. This includes formulating the strategy, communicating it, translating it into an operational plan, and supervising its execution - all while staying ahead of the competition. This is the core of a BizOps role, and it doesn't change much across companies. 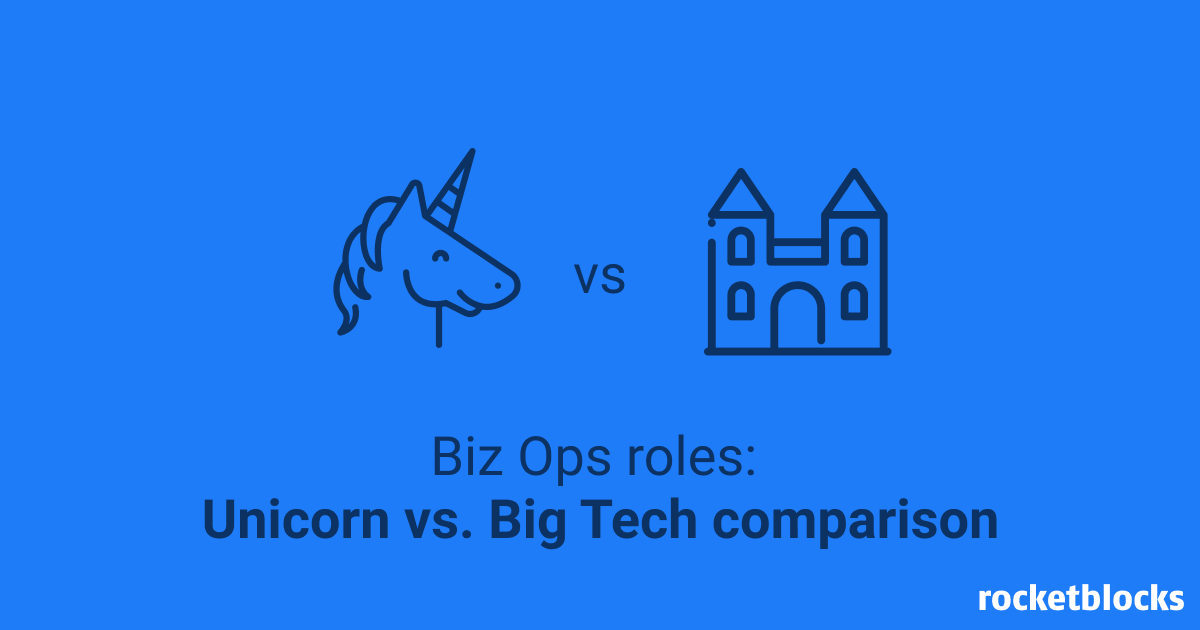 But joining a BizOps team is not a commodity.

The experience, learnings, and type of work vary depending on the company, team, and people you work with. This is particularly important, because one's experience in a BizOps team, for better and for worse, is dependent on it.

How can one know what to expect? There are too many variables in play, but a big divide is often found between a startup and an established company (e.g. Robinhood vs. traditional banks, Tesla vs. traditional automakers ).

This divide can be characterized by five main differences (note: there are many other differences such as salary, perks, benefits, and others, which we'll not go into because it falls outside of the scope of the role).

💡 Reader tip: the two sides of each dimension are covered below. The downside of each is highlighted in yellow - like this sentence.

In an established company there is less ambiguity...

This happens because processes are defined, revenue is accounted for and room for the unknown is minimized year over year. This is a very favorable position to be in (for both BizOps and the company), as there is a base to work from.

In a startup, the opposite is true. Nothing has been done before or, if it has, there's probably a completely new reality to account for. And just when things seem under control, then there's a new unexpected change. You never really know what to expect next, which can be very stressful.

For example, while in an established company you might be able to play around with a 1-2% input lever; in a startup you're having to take into account big needle movers, such as incorporating new product launches and new market expansions without prior data to backup assumptions. You never really know what comes next, but whatever it is, it is meaningful.

In an established company you have most of the processes already in place. You get on the train and go with it. Timelines are in place, templates are set, and roles and responsibilities are clearly defined. This makes it clear for everyone what needs to be done, but it also means there's less room to change or the change requires higher effort (and is less likely to happen).

On the other hand, although there's more ambiguity in a startup role, you get more freedom and flexibility to explore and create - you have a white canvas to draw on. There's no Excel template for you to fill out or process to follow. You have the freedom but also the responsibility and the challenge to go out and find the best way to do things (which is not for everyone).

In a startup you move fast...

Speed is key in the startup world.

The company needs to move fast to capitalize on the momentum. Which means there are too many things to do and too few people to do them at any given time. Which then means that BizOps folks, who are juggling dependencies across many teams, need to move even faster than the rest. This is stressful and requires the ability to manage multiple tasks, projects, and stakeholders at the same time.

In an established company, the opposite happens. Speed is not a given; it is a challenge given the size of the company. There are many teams, dependencies and people involved to be able to match the startup speed in most scenarios. Think about a small boat vs. a cruiser departing from a port. Another more tangible example is just looking at the OKRs cadence - typically quarterly in a startup (because things are always changing) vs. twice a year in an established company (because things don't change that often).

...but you also change gears a lot.

If speed is key, so is the ability to change quickly.

Yes, in a startup things move so fast that when you think you have alignment in a given direction, you find out that it is actually time to go a different route. In a BizOps role this means the ability to see several scenarios ahead, as well as to quickly turn around solutions in a short period of time. While this holds true in an established company, the rate and speed of change is lower and therefore the gymnastics to get to a given solution are spread across a longer timeframe, have more iterations, and are less likely to change.

In an established company, you get the benefits of scale...

One of the big advantages of large corporations is their size.

A large company is more likely to have solutions available that can easily be replicated and scaled to various teams. For BizOps this is great news. It means there are teams responsible for systems, teams to pull data, there are outsourced teams for low added value tasks, amongst other benefits.

In a startup, this is not the case. BizOps folks need to get their "hands dirty" and do the manual, laborious work themselves for most of the situations and even step outside of their role when needed (e.g., project managing an operational project to ensure success).

...but also the drawbacks of alignment.

If there are many benefits of scale, there is an equal drawback on the complexity of aligning people from different teams.

BizOps is central in this role, but the bigger the company the more challenging is the endeavour - there are more people, more conflicting interests, more dependencies, more meetings, different time zones, and a lot more other things to manage.

On the other hand, someone in the BizOps role in a startup might be in the same room with the rest of the team (or even the rest of the company). It is much easier to just stand up and ask!

In a startup you're learning a lot...

You have to build in a startup. Things don't exist and so need to be created.

In BizOps you have to create the strategies, build the plans, prepare quarterly updates, investors' meetings, the allhands content, and so on. You're also learning about the business, competitors, the market, new technologies, and much more. You're learning by doing. And doing and learning a lot the whole time.

This also happens to an extent in an established company, but there's less creation and more maintenance, plus the learnings are more specific (you go deeper), and tend to need several cycles to happen (eg, financial planning 1x/year).

...but you're mostly by yourself.

Because of its nature, a BizOps role in a startup is mostly you figuring out how to do things.

There are other folks of course, but everyone's building and figuring things out. There are very few resources, and it is mostly up to you to go out and explore. It is simply the reality in this environment, but luckily there is always a network of people within reach.

In an established company, on the other hand, there is more structure, more content, more resources, and more people to support you. Folks also tend to be more experienced,with many years in the same line of business - good to leverage lots of knowledge and expertise.

In an established company you have a well-defined scope...

The larger the company, the more specific the roles tend to get. This also happens with BizOps.

One central team might be enough in a 1,000 people company with two offices and one business line. That doesn't work with thousands of employees spread across the world, with several different business lines. For the most part, the scope of the role is well defined and you know what you need to do for you and your teams to be successful.

In a startup, the scope of your work is less defined. You have to be willing to do what is needed without necessarily knowing what it is or how long it'll last. That is why many of the initial roles within a BizOps team at a startup are usually vague and also why many recruiters look for candidates with cross-functional backgrounds in areas like consulting and finance.

...but you don't get much visibility outside of it.

A well-defined scope comes with a price: more rigidity. Unless specifically carved out as part of a one off situation - like stepping in for someone, a special project, or one's personal interests - taking on additional responsibilities outside of the core role is less likely to happen. Stepping outside of one's role is harder in a larger company, since the barriers to do so increase as the business gets larger and more complex (eg, learning curve, different stakeholders, diminishing returns).

This is not the case in a startup environment. In fact, it is quite the opposite for BizOps folks. One day you're doing BizOps, the next you're doing SalesOps, and the day after might be Data Science. This might look exciting, but it is taxing and demanding. It means a constant need to adapt and the willingness to step outside of one's comfort zone.

Summary: different, not better or worse

Once again, there's not necessarily a better or worse option between the two. They are different.

There isn't a perfect solution when making career decisions. It's all part of an ongoing quest of learning and self-development. In the end, it all comes down to maximizing the overlap between one's goals and expected learnings and experiences from each decision.

Back Next: Breaking in

P.S. Are you preparing for Strategy & BizOps interviews?

Get real interview questions. Learn from sample answers from BizOps leaders with experience at Google, Uber, Opendoor & more. Plus concept reviews and premium 1-on-1 Expert coaching.