The term soft skills, as opposed to hard skills, makes it seem as though these are less important or less cool than their counterparts. However, this couldn't be further from the truth.

In a BizOps role, soft skills are as important or even more important than hard skills.

To be clear, they're both important. One will not break into the BizOps world without a good foundation of hard skills (how do you get to those insights if you can't build a model?). 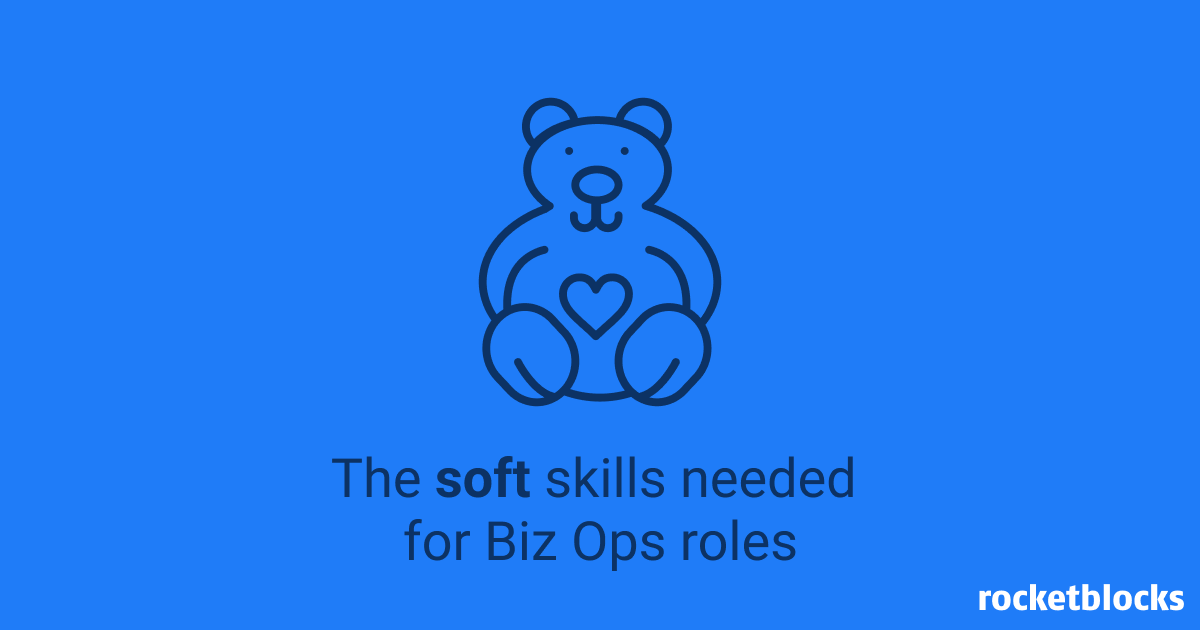 But for all of its advantages, hard skills are not a differentiator. They are table stakes and pretty much a given for anyone that is in BizOps. On the other hand, soft skills can set one apart and make a difference between succeeding or not in the role. In other words, hard skills get you hired, soft skills will help you flourish (and get promoted!).

There are many soft skills that are key to success in a BizOps role, but these can be boiled down to seven main ones (not in any particular order).

The ability to take a complex situation, simplify it to the essence and make the potential paths forward clear to everyone. This is critical for a bizops person (and any leader). For example, pulling insights from data is a critical component to success in this role, but that is just one part of it. Being able to simplify them is even more important. What good is to pull insights that only increase complexity? What is expected is that a person in BizOps brings simplicity and clarity to everything she touches.

For example, imagine you've been asked to make a recommendation for customer support headcount growth over the next year. You do a ton of research and find that there are 15 main drivers of the decision. One approach would be to share all the insights and data about these drivers, variations, etc. However, another approach would be to simplify and focus on the ouputs (e.g., "there are three main options") - this frames the problem simply and then you can dive into the drivers that might influence which way to go.

Another critical soft skill is the ability to communicate effectively. Communicating effectively means that the other person (or group) understands the message that is being delivered. When the spectrum of people and channels used is vast, communication can get lost/mixed up. Which is where BizOps steps in, acting as the translator, and ensuring that everyone is on the same page.

The expectation is that the communication style of a BizOps person adapts to the channel being used and can convey information across the company. This includes vertically, from the CEO to the just-hired, recent grad level, as well as horizontally across teams (EPD, Marketing, Sales, CX, Data, Legal ...).

For example, when presenting to the CEO one is expected to start with the solution and then, only if needed, go into the details. On the other hand, when communicating with a customer support manager, one might need to start with the problem and guide the manager to the solution presenting all the facts. This is because the CEO doesn't have the time or context for all the details, while the manager is more into the weeds and needs to understand the root cause of the decisions being made.

How can one expect to drive change without being able to influence others? That is an almost impossible task! Being able to influence is paramount to getting things done in BizOps, especially when decisions are hard and convincing is needed. One thing about influencing is that it is not bad or negative. The goal is to bring the person along your point of view and make some adjustments as needed.

For example, how do you convince someone to take a 30% cut on their department budget and be okay with it? You'll have to be able to make her understand the why \, the trade-offs, and what are the alternatives (if any). This ensures that there's alignment on both parts and commitment to the decision. Effective influencing can get you allies in tough situations. The opposite would be to just enforce the decision, only to have it be undermined in every sequential step.

The old saying "under promise and over deliver" holds true for BizOps. It's critical to manage expectations efficiently in a BizOps role so as to avoid surprises. This is applicable both to the internal relationships within the team (eg, with one's manager) and with key stakeholders.

Per the example above, if you shy away at the outset and say, "Hey, we might have to make some small cuts", 30% would be a shock later. But if you say "Hey, things are really rough right now, and we're going to need to pull back, maybe as much as 50%", then a 30% cut might not look that bad after all.

Active listening is a key skill in a BizOps role because 1) there are many instances where how things are said (the first time) is more important than what is being said.

For example, if a stakeholder is unhappy with a reorg taking place, they might be (unintentionally) more transparent about it the first time they express their thoughts vs. a few days after processing it; 2) complex topics need attention to be grasped fully; and 3) people open up and are willing to help if they feel they're heard. Failing to capitalize on these will make one's life harder, while the opposite will result in better outcomes overall.

Imagine you have the annual plan locked, and now it's time to communicate it to key stakeholders. You can share what you have as is (a massive Excel full of details) or be proactive and tailor it to each stakeholder's needs (sales managers probably don't need to know the IT department HC numbers). This is an example of where being proactive/anticipating future needs and solving them ahead drives a better result for everyone (you avoid unnecessary confusion). This mindset should be applied to all components of BizOps.

One benefit of working in a BizOps role is seeing the full picture. Folks in a company are aligned to a specific business unit, organization, or team. This blinds them to what's outside of their reality. BizOps on the other hand is centralized and is able to see the company as a whole. But this is only an advantage if acted upon. For that, one must be able to connect the dots.

For example, if there's an expected reduction in a Sales team, but a likely increase in another six months down the road, it is up to the BizOps folks to make that connection; instead of firing and hiring a bunch of folks it's better to try to move them around.

All in all, while hard skills can be clearly written down as a job requirement, soft skills are less tangible, more subjective and for the most part, harder to develop. But they are still skills that through self-awareness (recognizing one's development opportunities), deliberate action (finding role models and situations for intentional practice), and perseverance (enduring when things don't go as planned), can be improved upon over time, on what is a lifetime journey of learning.

Back Next: BizOps at unicorn startups

P.S. Are you preparing for Strategy & BizOps interviews?

Get real interview questions. Learn from sample answers from BizOps leaders with experience at Google, Uber, Opendoor & more. Plus concept reviews and premium 1-on-1 Expert coaching.