The future of consulting: a deep dive on the rise of McKinsey, BCG and Bain and what the future holds

The rise of McKinsey, BCG and Bain and the management consulting industry is a textbook tale of business evolution.

In 1926, McKinsey began with the simple idea to apply accounting principles to management challenges. Today, McKinsey works on a wide range of challenges: from building a mobile app to bankruptcy restructurings.

How did we get here? And what does it mean for the future? 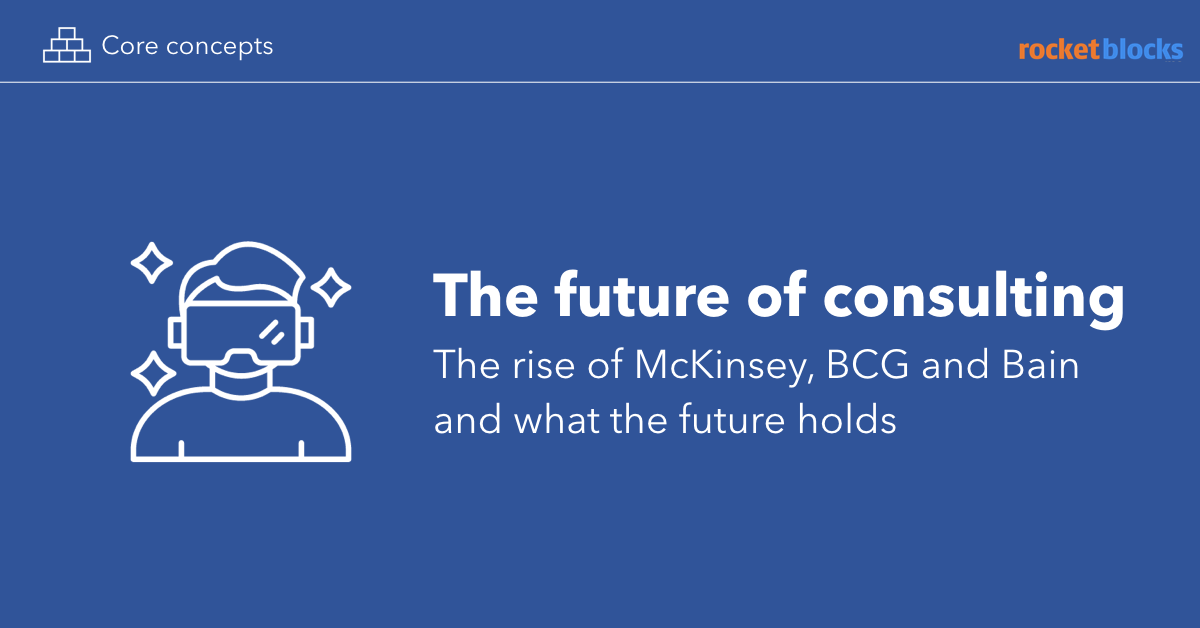 In this deep dive, we'll go end-to-end, beginning with the origins of McKinsey, BCG and Bain, dissecting their growth and concluding with how the firms are reinventing themselves right now.

Origins of McKinsey, BCG and Bain

To understand the future, let's start at the beginning.

McKinsey & Co. got its start in 1926 - just one year after the founding of Stanford Graduate Business School and eighteen years after HBS opened its doors. The conditions were ripe for a new type of firm: 1) formal business training (e.g., MBA programs, management training rotations) was in its infancy so there was a dearth of talent available to companies and 2) the global economy was on the cusp of a massive 100-year expansion. Taken together, this meant plentiful business opportunities but a lack of capable managers to pursue them.

McKinsey developed and refined its original value proposition against this backdrop: sage management advice, backed by a codified, logical approach to business. It wasn’t long before other aspiring entrepreneurs recognized there was a big opportunity here.

In 1963, Bruce Henderson launched BCG, which was originally structured as a consulting arm of a Boston based bank. Its charter was to give advice to the bank's clients. When the early team was debating how to pitch their services Henderson suggested calling it "business strategy," which prompted laughter from the others. They asserted it was too vague and clients wouldn’t know what it meant. Reportedly, Henderson shot back: "That’s the beauty of it, we’ll define it."

Shortly after that, Bill Bain, a former BCG Partner himself, left BCG reportedly over a disagreement about the structure of the firm (then still an arm of the bank) and launched Bain & Co. in 1973. At that point, it was off to the races!

In the last fifty years, the three firms expanded rapidly and defined management consulting as we know it. In particular, they've relied on three key growth drivers: 1) managing complexity 2) expanding internationally and 3) deepening their engagement model.

As global growth and businesses increased their reach, the inherent complexity in running and scaling any operation grew by leaps and bounds.

New challenges continued to pop up, from managing a global supply chain to figuring out multi-channel marketing to streamlining two global organizations after a merger. And this is just a tiny sliver of the full list.

Increasingly, McKinsey, BCG and Bain pitched themselves helped their clients navigate these issues and, in turn, they built up their own expertise that compounded over time into an incredible competitive moat. The flywheel worked like this: a business faced a new challenge, it sought out a firm to help them navigate the issue, the firms advised, which built their own knowledge and expertise, thus making them even more valuable to the next client who needed help.

As their expertise compounded, Mckinsey, BCG and Bain threw "fuel on the fire" by rapidly increasing the surface area they could apply their expertise to via international expansion.

While each of the firms started in the US, their reach has expanded to every corner of the globe. The largest of the three, McKinsey, operates 130 offices across 65 different countries. Even Bain, on the smaller end of the spectrum now operates in 37 different countries.

To put this expansion in perspective, BCG has opened new offices at a rate of 1.6 offices per year since they were founded in 1963 - that's quite a growth rate!

In addition to international expansion, the firms also expanded vertically down into the client organization's as well.

For example, while McKinsey & Co. once focused on working exclusively with the C-suite, the group of uppermost executives at any companies whose title began with Chief, they now engage with multiple levels of the organization starting at C-suite but also scaling down to VPs and directors. The same is true with BCG and Bain.

Ultimately, this allows the firms to pitch their services at any level where a client company needs advice and guidance.

However, change is afoot. The growth drivers that have worked in the past are increasingly tapped out and the firms face two main challenges.

Quite simply: global management expertise has grown substantially, eroding the value of the original value proposition.

Why? There are two main factors. First, global MBA programs have grown substantially. In the early-1900s, they may have produced an aggregate 1,000 graduates per year - today produce 50X or more. Second, the firms' own "up or out" policies mean that over the decades the firms have trained thousands of consultants who are now working in industry, often at the companies who were formerly their clients.

For example, many Fortune 1000 companies who make up a sizable portion of the client base for consulting firms, staff large internal consulting arms that are populated with alumni of McKinsey, BCG and Bain. Google has a 100+ in-house strategy team. KKR, the private equity behemoth, staffs its own in-house consulting team, KKR Capstone, for due diligence and engagements with their portfolio teams.

While the leading consulting firms still have a wealth of expertise to draw on, this expansion of management talent leads to pricing pressure.

In addition, clients are increasingly demanding results - not just recommendations.

Regardless of what rationale leads to an abandoned recommendation, this is clearly not the ideal result from either the client side (e.g., an expensive engagement led to no action) or the consultant side (e.g., months of work led to a recommendation that was never battle tested). As we'll see below, this headwind is an opportunity in disguise.

Despite the headwinds, the firms are still excelling. Importantly, they've studied the headwinds and are adapting their business models accordingly.

This enables the firms to sell deeper into the relationship, extending the life cycle of each client engagement and meeting the client's own demands to help execute on their own recommendations.

McKinsey is pursuing this aggressively, staffing up a formal Implementation practice and building out its capabilities to do that across all the industries (e.g., Aerospace, CPG) and functions (e.g., marketing and sales, pricing).

Similarly, BCG is using their stronghold in post-merger integration, which already focuses on tactical implementation of a strategic vision, as a model for selling additional implementation projects across multiple industry practice areas.

Second, the firms are revisiting the prior playbook and seeking to establish new expertise in key areas (e.g., create new flywheels).

Former complexity hotspots that previously drove significant business, like pricing and merger integrations, are better known quantities now (due to the aforementioned knowledge dissemination). However, emergent areas like data science, artificial intelligence and digital transformation, are both complex and critical to success.

One can see evidence of this strategy playing out in the new groups that McKinsey and BCG have established in the last five years. McKinsey has McKinsey Digital, which focuses on building, launching and iterating on software initiatives, and McKinsey Analytics, which focuses on data science and analytics challenges.

The track record of these companies is impressive.

Each of the firms has navigated global recessions, massive technological shifts and an ever-changing business environment. Their initial success stemmed from creating a rigorous approach to business strategy, using it to build expertise and then delivering that expertise to clients at every level of the organization, no matter where in the world they were.

In the coming decades, the firms will likely draw on these same lessons. The push into implementation mirrors their earlier push deeper into organizations (e.g., from the C-suite down to directors). And the push into building software and analytical tools for their clients is the new frontier in establishing unique expertise that clients will need for decades.

As these firms continue their evolution, it will be exciting to see exactly how everything shakes out. One thing is for sure: the next fifty years will be completely different.

For a video overview of this topic, check out our Founder's take below.