If you're interviewing for product management roles at Google, it's extremely helpful to understand the scale at Google operates and how they've grown over time.

The Google data pack below, which we've pulled together from SEC filings, press releases and public statements from Google (plus our own analysis, will help you get a grip on key Google metrics and evolution. We cover the following:

Where do metrics show up in product management interviews?

First, the good news. No one is ever going to ask you: "How many products with 1B+ users does Google have?" That question doesn't test anything aside from your recall of a relevant fact.

However, there are many instances in PM interviews where knowledge of relevant benchmarks is an important jumping off point for further discussion. Consider the following interview questions:

In each of the aforementioned questions, understanding the rough benchmarks helps tremendously.

The below timeline shows Google's core product launches as they've grown over the years. 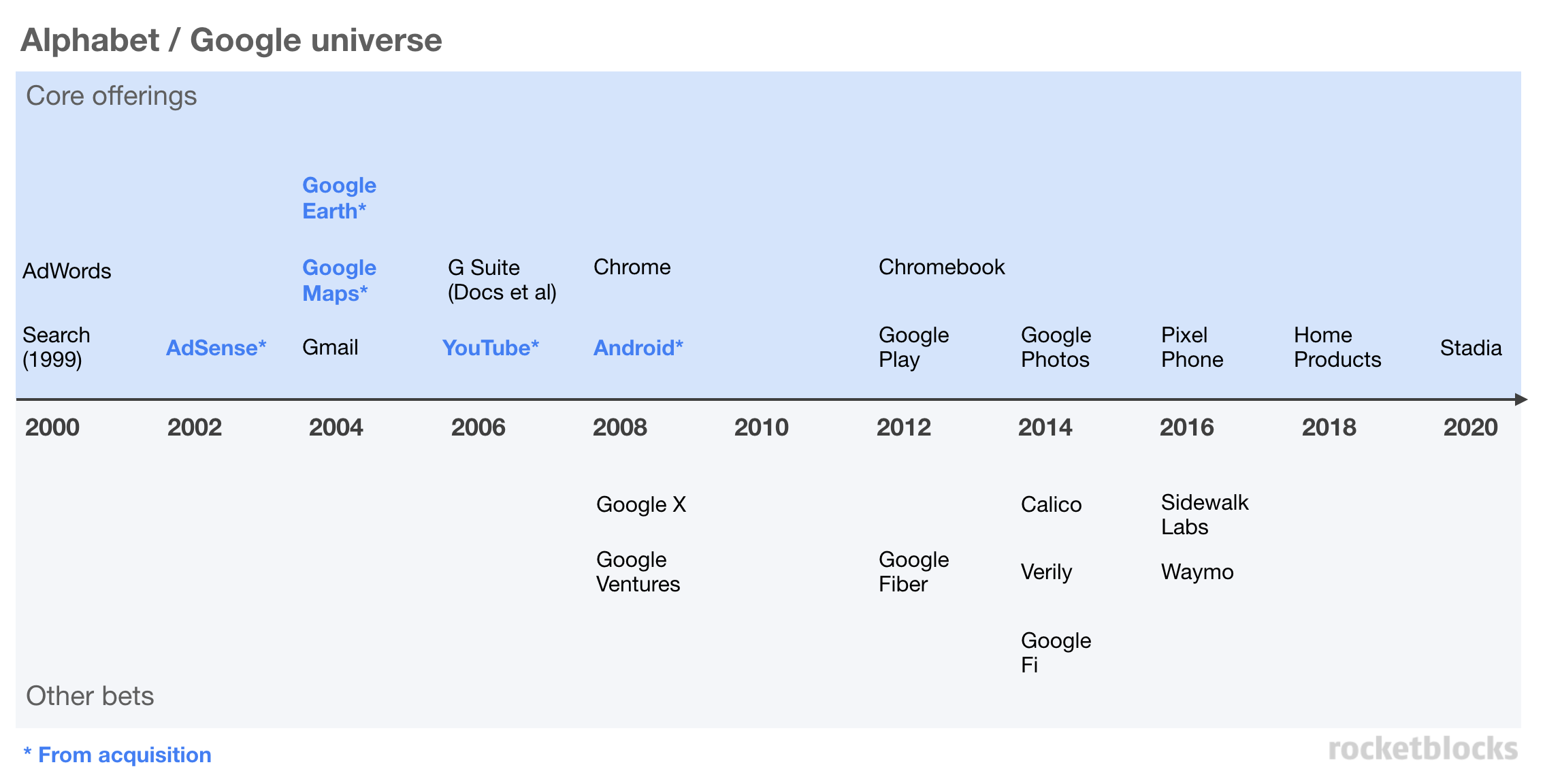 Simply put: Google's quarterly revenue growth is astronomical. And the pace of YoY growth they've managed to maintain, with only a few blips (only one negative quarter since 2008) is impressive. 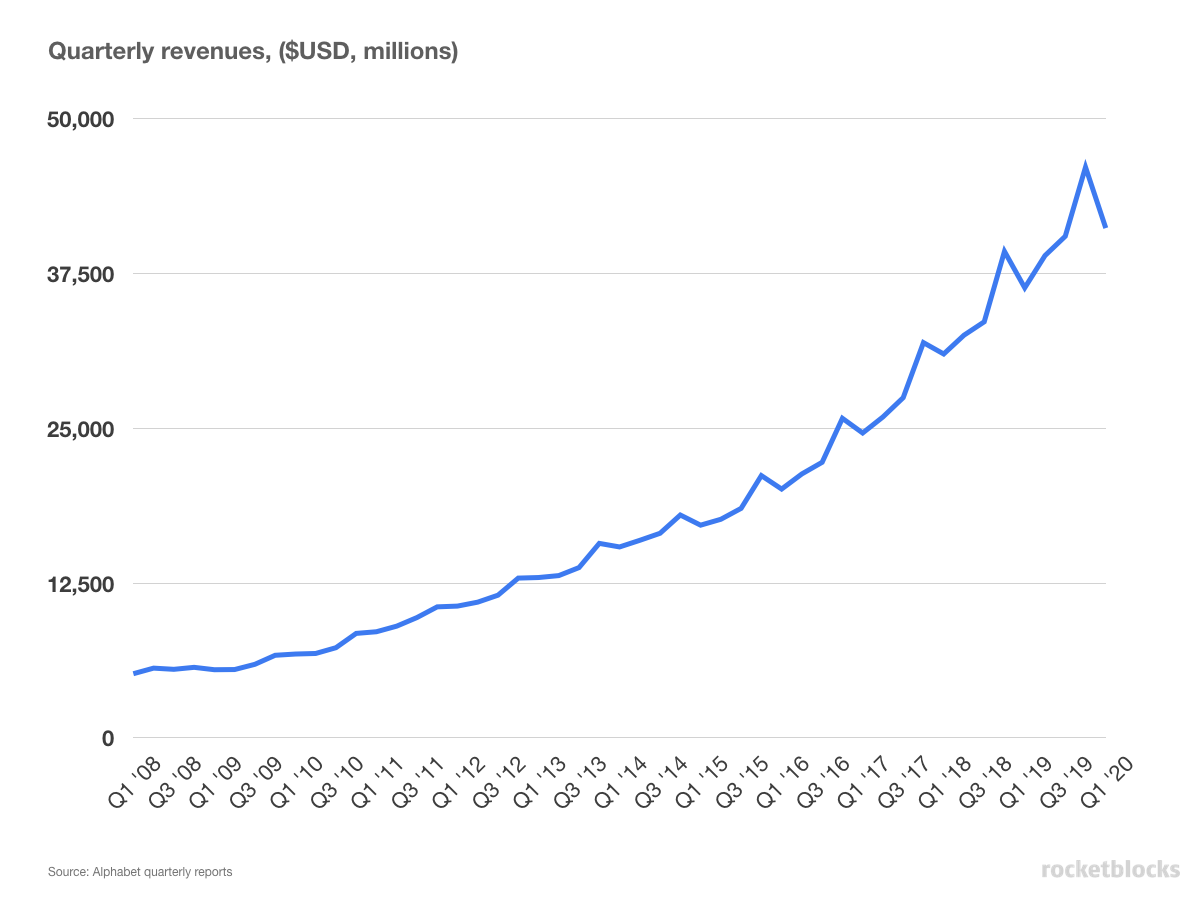 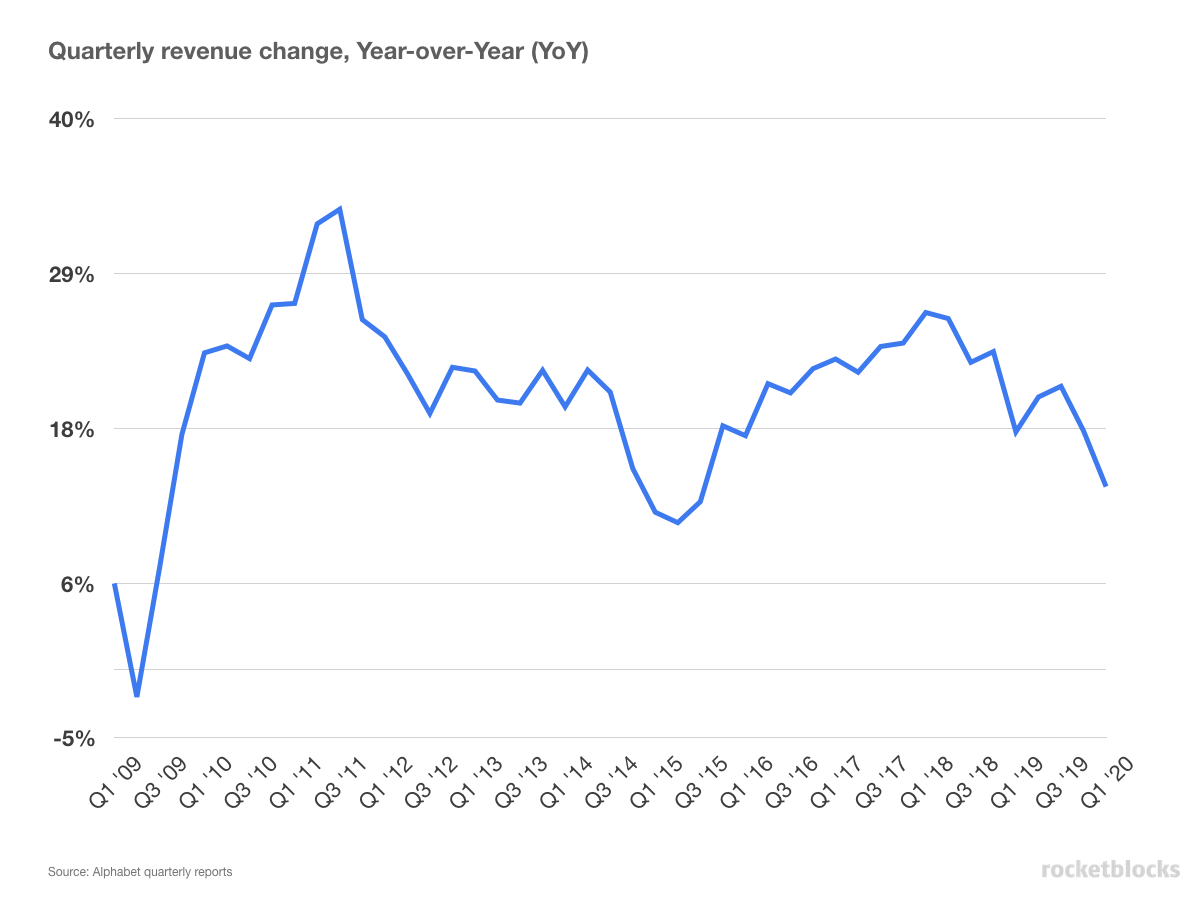 Got a Google interview?

"Rocketblocks was essential in my PM internship prep. Overall, RocketBlocks allowed me to develop crucial PM interviewing skills without which I could not have landed multiple internship offers." -- Anurag Ojha, Google PM, Darden MBA

Over the years, Google has publicly spoken about the number of queries they handle (especially in the first decade), alhough they've been more coy with numbers lately. The below estimate is built from public statements from Google executives and extrapolating the trend using a declining growth rate. 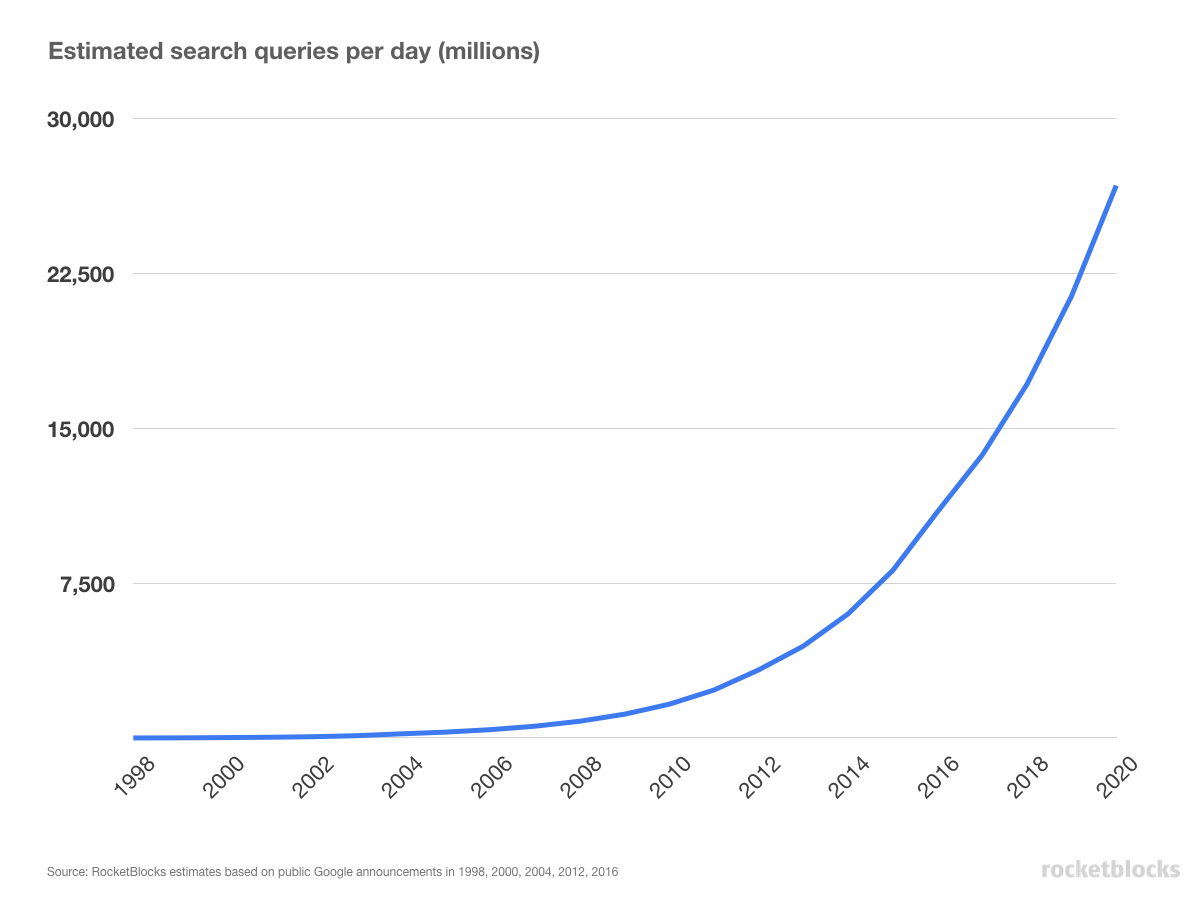 On the back of Google Search, the company has successfully extended its reach into a new territory.

Some efforts, like YouTube and Maps, are effectively narrowly defined search engines (e.g., "How do I get from location A to B?"). Others, like Android and Chrome, help deliver high quality internet experiences to users and, thus, indirectly drive core metrics like queries. 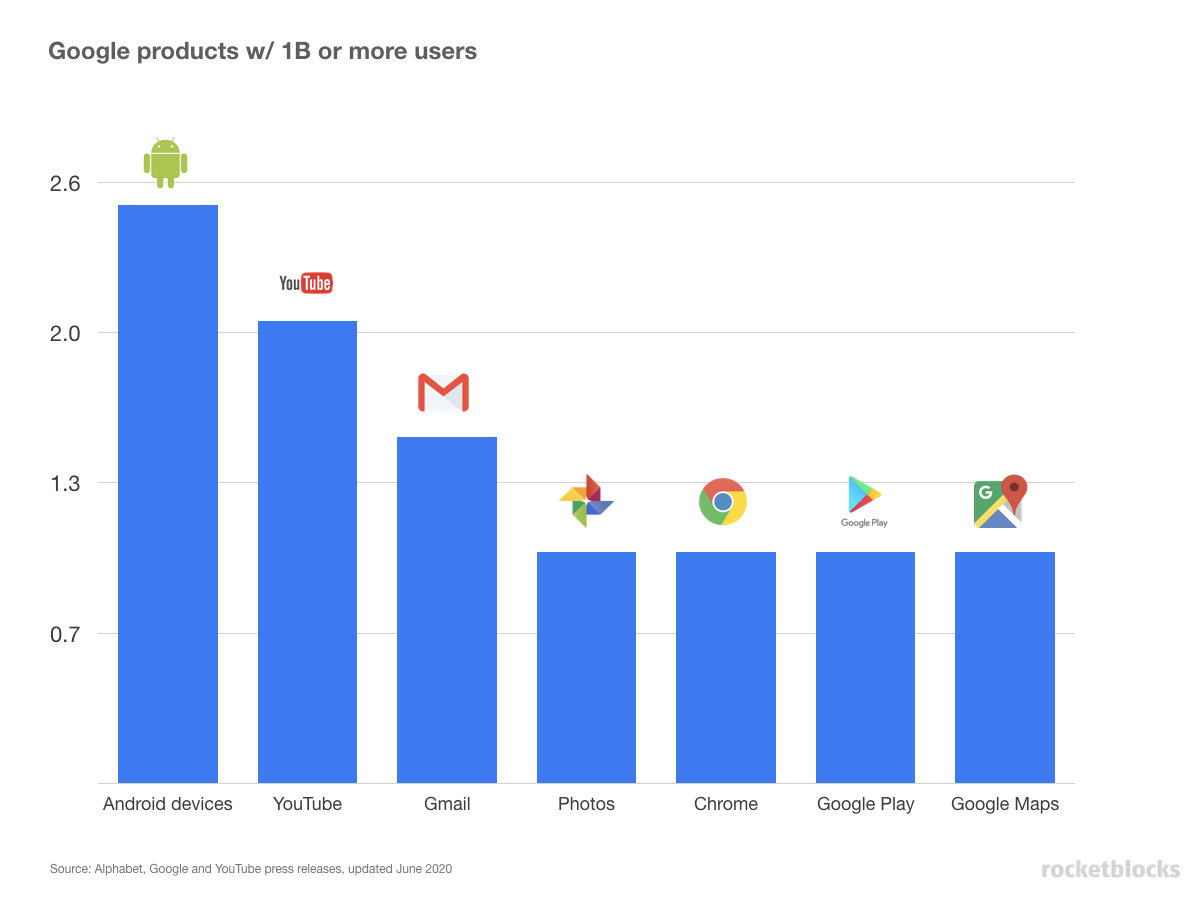 Key takeaways on Google's user base

Let's zoom in on Gmail here, one of Google's key products that more public user counts are available for. 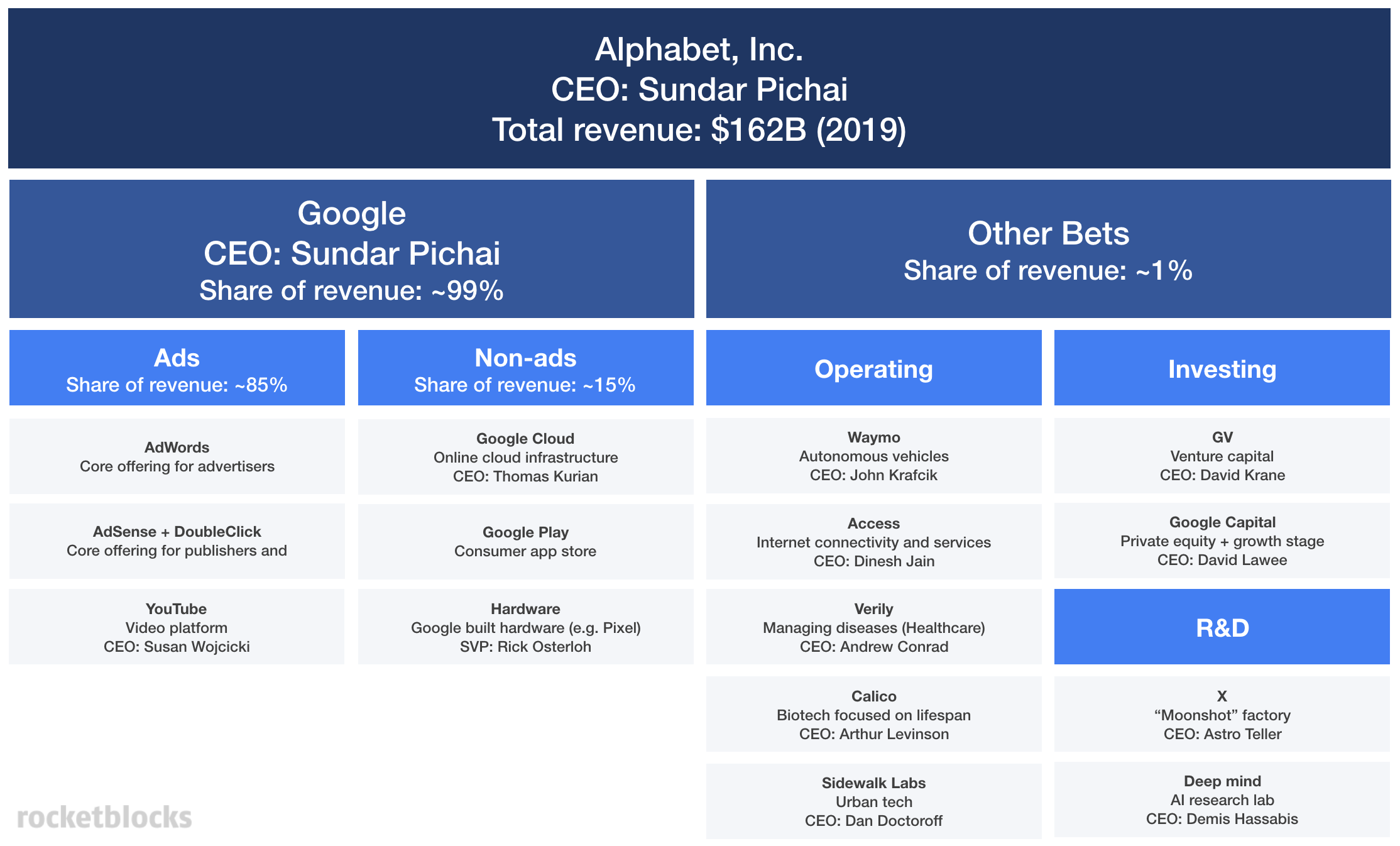 On all dimensions, users, queries and revenues, Google is not only operating at massive scale but still growing quickly. However, most of that growth has come from a string of extremely successful core products that Google launched (or acquired) between 2000 and 2008.

For Google continue its growth, the next generation of Alphabet Other Bets (e.g., Waymo, Fi, Calico, etc.) will likely need to kick in and help contribute in a meaningful way.