If you're interviewing for product management roles at Facebook, it helps to have a strong grasp on the key metrics.

Below, you'll find our FB data pack, sourced from Facebook releases and industry reports and annotated with our commentary and insights. We cover the following:

Where do metrics show up in PM interviews?

First, the good news. No one is ever going to ask you: "What was Facebook's MAU in Q1 2020?" That's a useless question since it only tests your ability to memorize a fact in isolation.

However, there are many instances in PM interviews where knowledge of relevant benchmarks will be foundation for a deeper discussion. Consider the following interview questions:

In each of the aforementioned questions, understanding the rough benchmarks helps tremendously.

For example, if you didn't know Facebook had roughly 1.5B users per day, where would you start? Or if you didn't know that Facebook DAU/MAU engagement rate was roughly 65% and had stayed flat for years, you wouldn't have any idea that moving engagement up by 10% (whether relative or absolute) would be a monumental task! 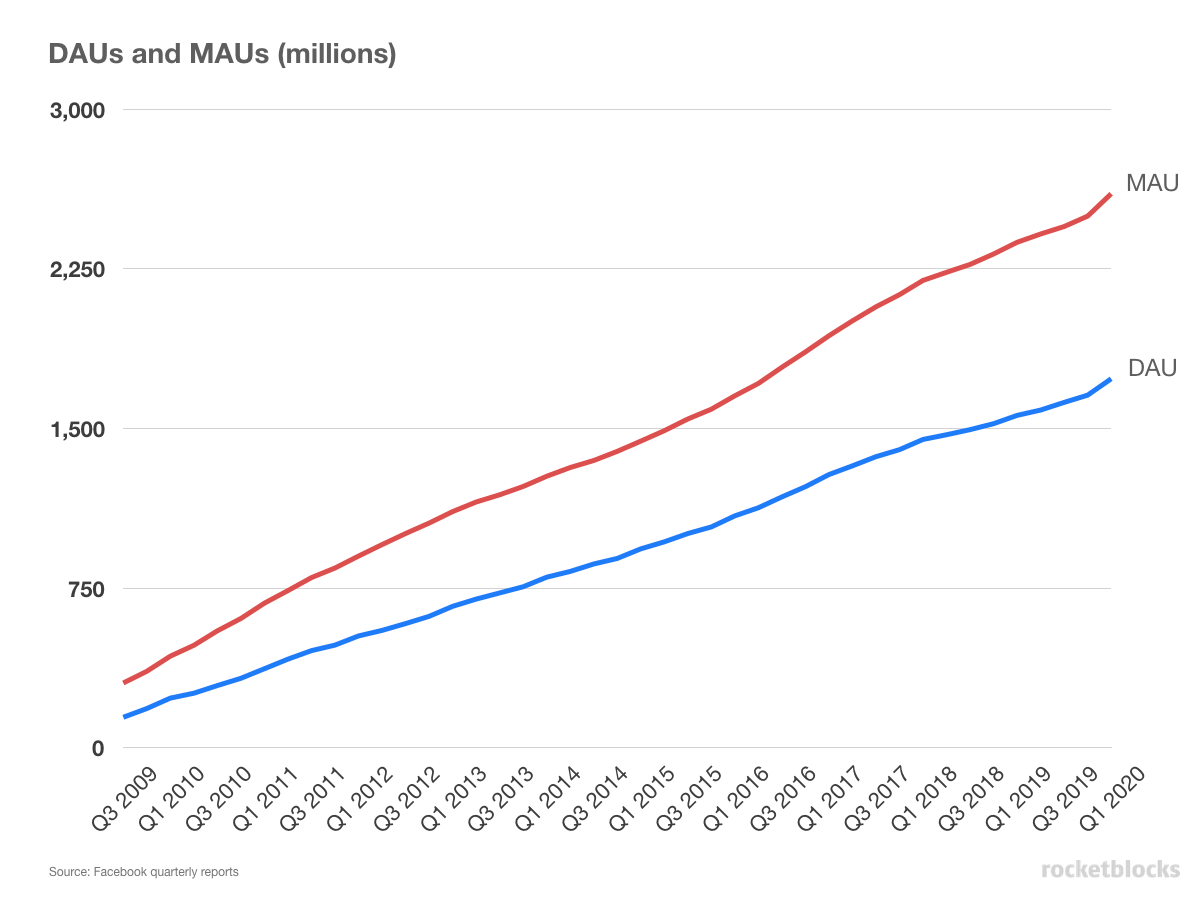 Another key metric that we can derive from Facebook's DAU and MAU numbers is their daily engagement, defined as DAU divided by MAU. This metric provides a sense of how "sticky" a product is by measuring what percentage of monthly visitors show up each day. 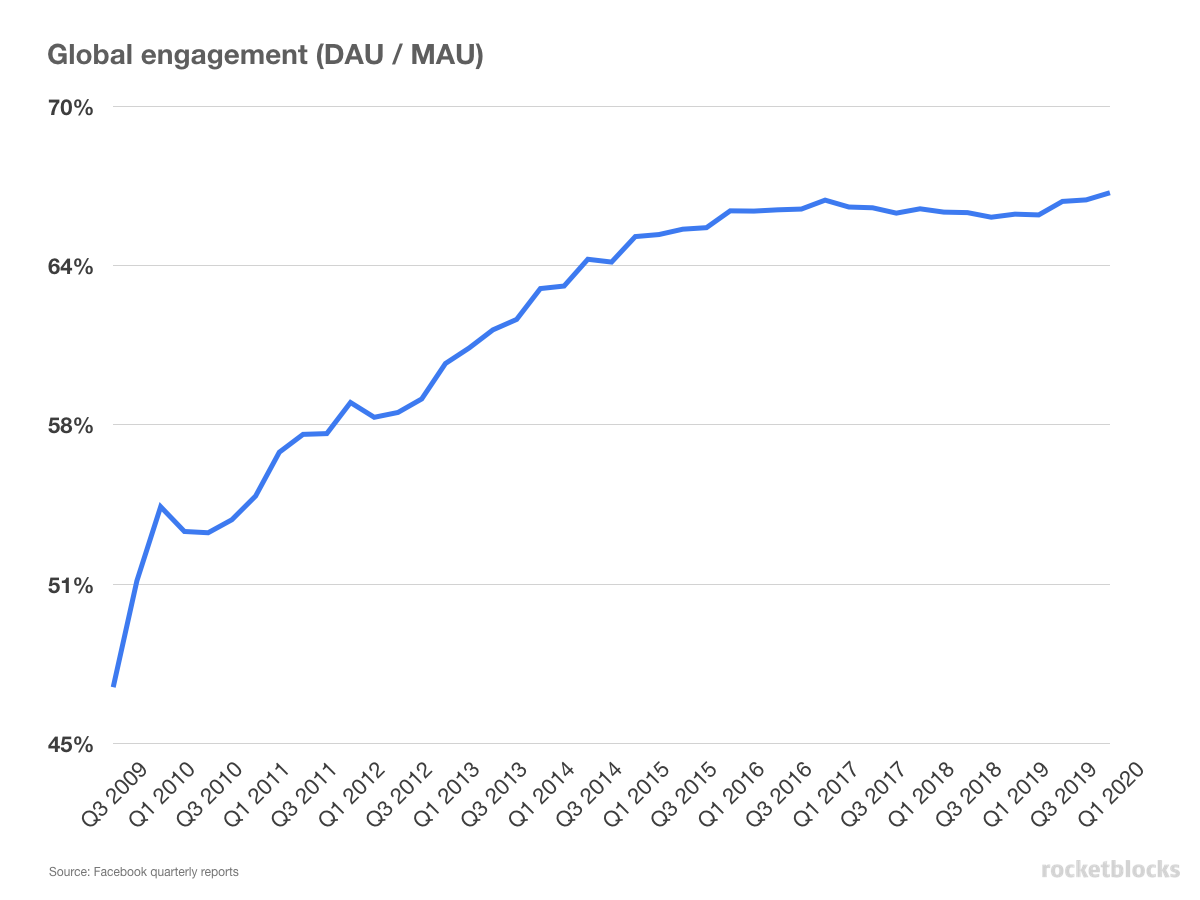 Got a FB interview?

"I made it through the gauntlet, and just accepted an offer for a PM role at Facebook! RocketBlocks was the most helpful resource I came across during my preparation by far." -- Tom, Facebook PM

Digging in further, we can look at QoQ growth in both DAU and MAU, which illuminates the pace at which Facebook has been able to grow its user base. 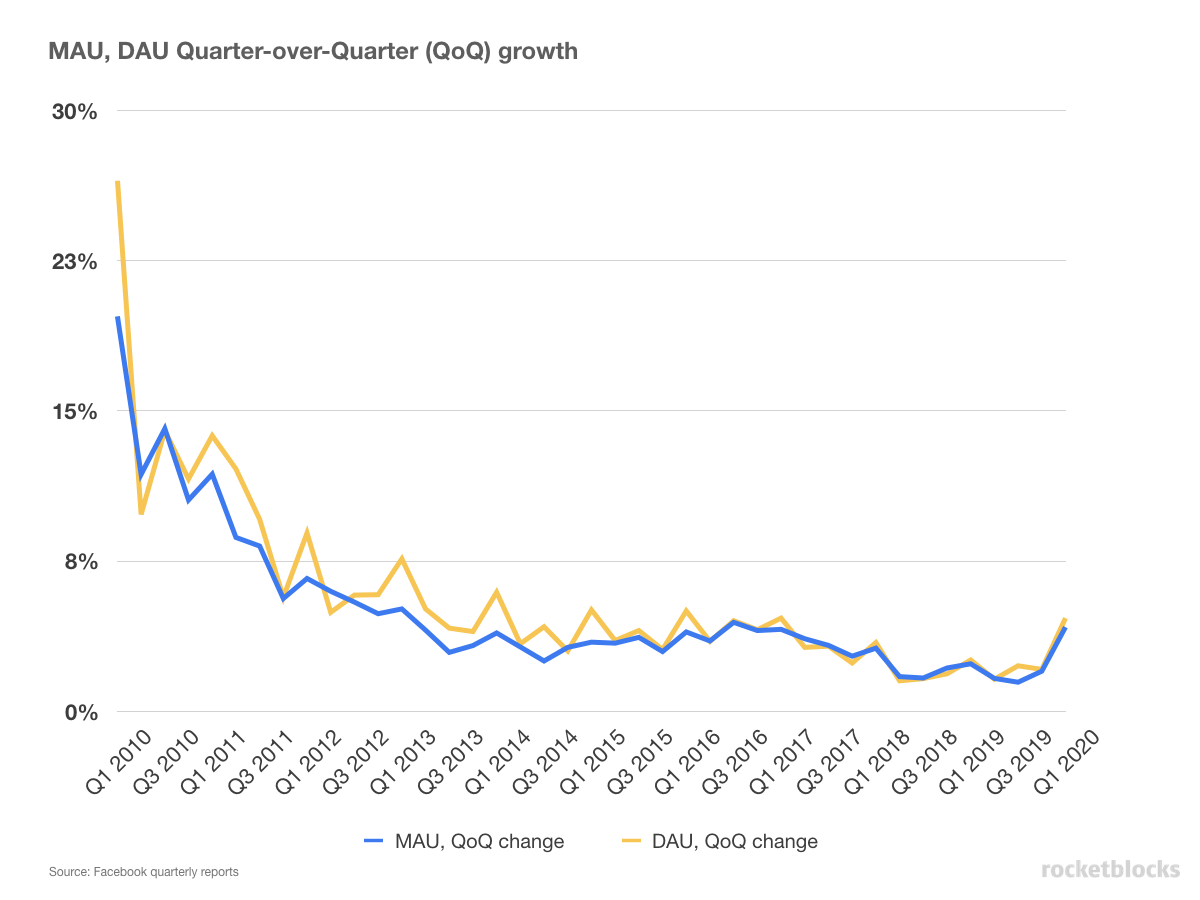 Key insights from the QoQ growth numbers in DAU and MAU

While Facebook's user growth has exhibited a more steady, linear climb over the last five years, Facebook's revenue growth has been on a more exponential growth path. 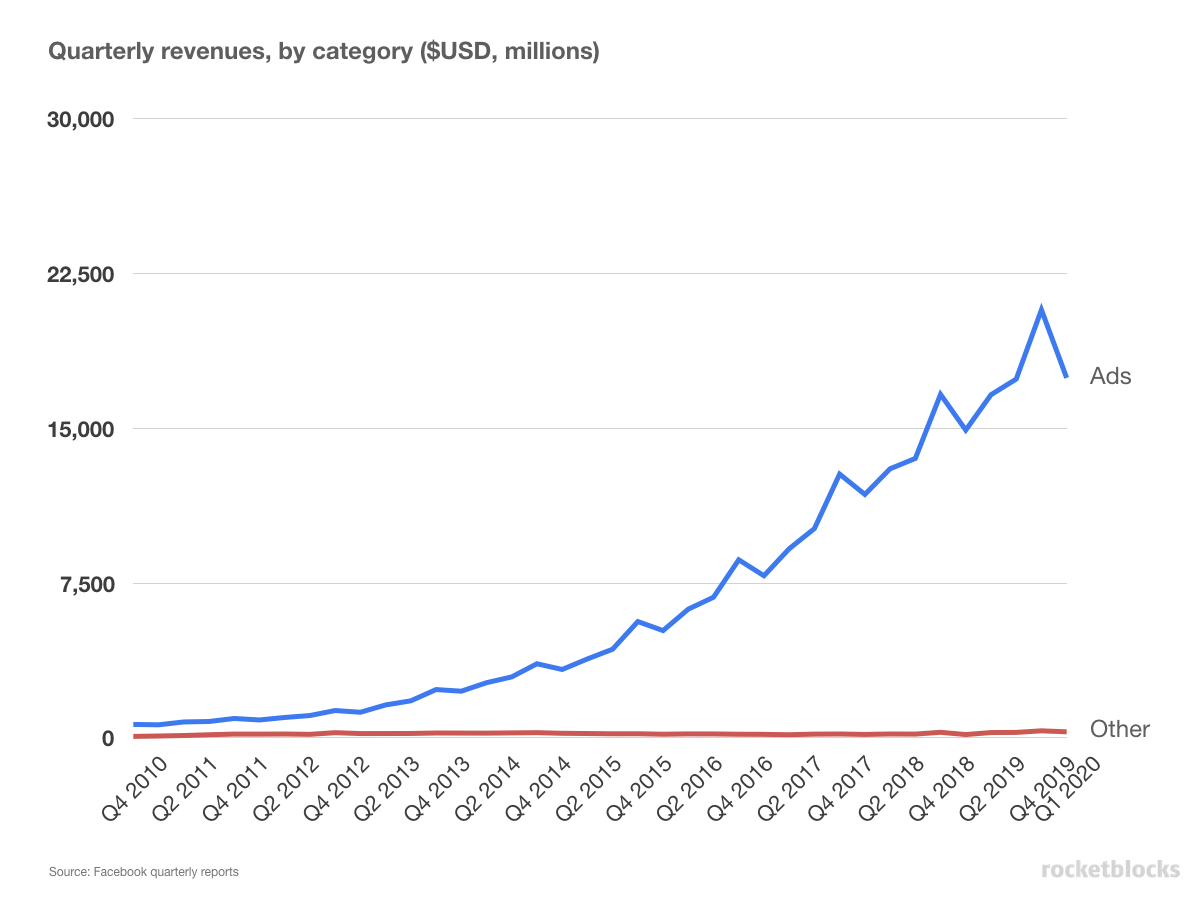 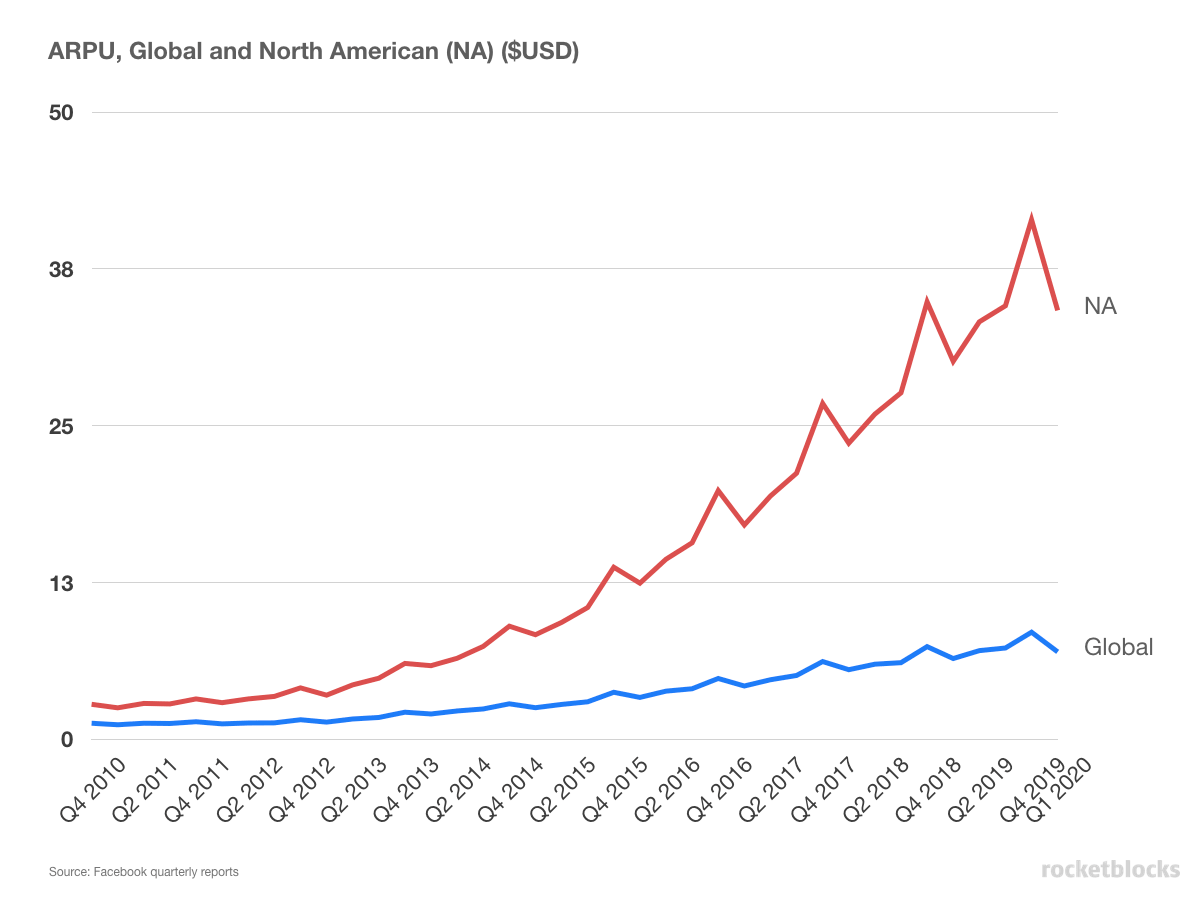 Here we've plotted the year-over-year growth in Facebook's ARPU metrics, which helps illustrates Facebook's increased ability to monetize users and compares the metrics on a YoY basis to control for seasonality. 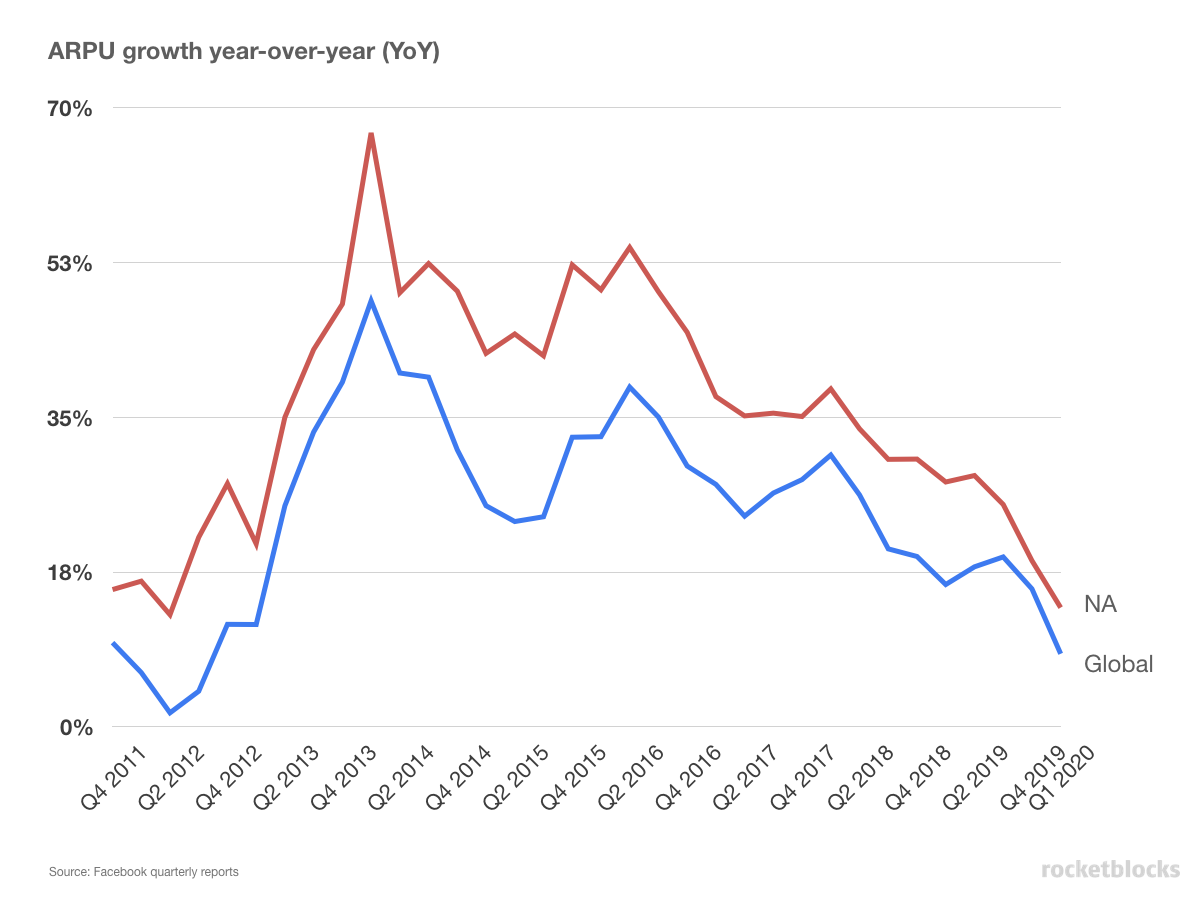 Get 35+ pages of in-depth analysis on Facebook's evolution, company and business. Written by PM experts.

Get the FB Primer