If you're interviewing for product management roles at Amazon, a key step in your preparation should be understanding the core trends in their business.

Why familiarity with Amazon metrics helps in product manager interviews

Thankfully, no one will ask you a direct question about some Amazon metric (e.g., "How many Prime subscribers did Amazon have in 2015?").

However, it's very likely that certain interview questions will require familiarity with the nature of Amazon's operations and scale.

In each of the aforementioned interview questions, understanding key Amazon metrics helps tremendously. For example, if you didn't know that Amazon has around 100M Prime subscribers, you wouldn't properly understand the implications of trying to double Prime subscribers. Thus, knowing the right context and metrics plus sharpening your PM interview skills can help set you apart.

First, let's look at how Amazon's evolved since its founding in 1995 to a global powerhouse and second company to ever hit a trillion dollar market capitalization.

In terms of product portfolio, Amazon in unique, relative to its big tech brethren like Google and Facebook. It's significantly more diverse. For example, they've spanned the product spectrum from the mundane (e.g., selling diapers) to cutting edge, technology offerings like AWS to entertainment with Amazon Prime Video and Amazon Originals.

Buying their way into new opportunities

In the mid-2000s, acquisitions centered around the first strategy: expanding their retail footprint into clothing (e.g., Zappos, ShopBop) and sundries (e.g., Diapers.com). More recently, acquisitions have largely been focused on the latter: establishing footprints in new business lines (e.g., online gaming with Twitch or groceries with WholeFoods).

In their annual filings, Amazon breaks out revenue into three key segments: North American revenue, International revenue and AWS revenues. At a glance, we can see that each key segment is growing at a healthy clip. 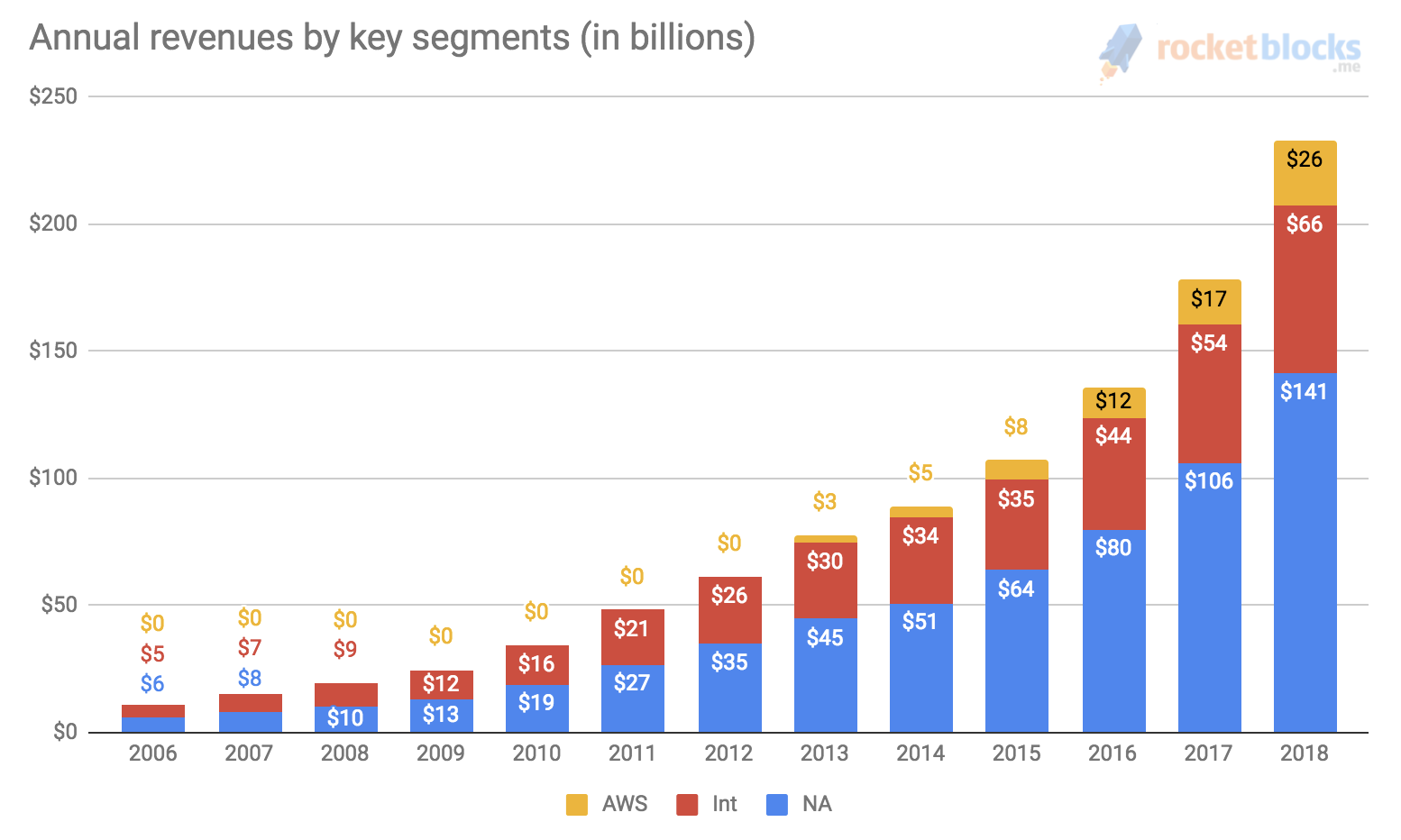 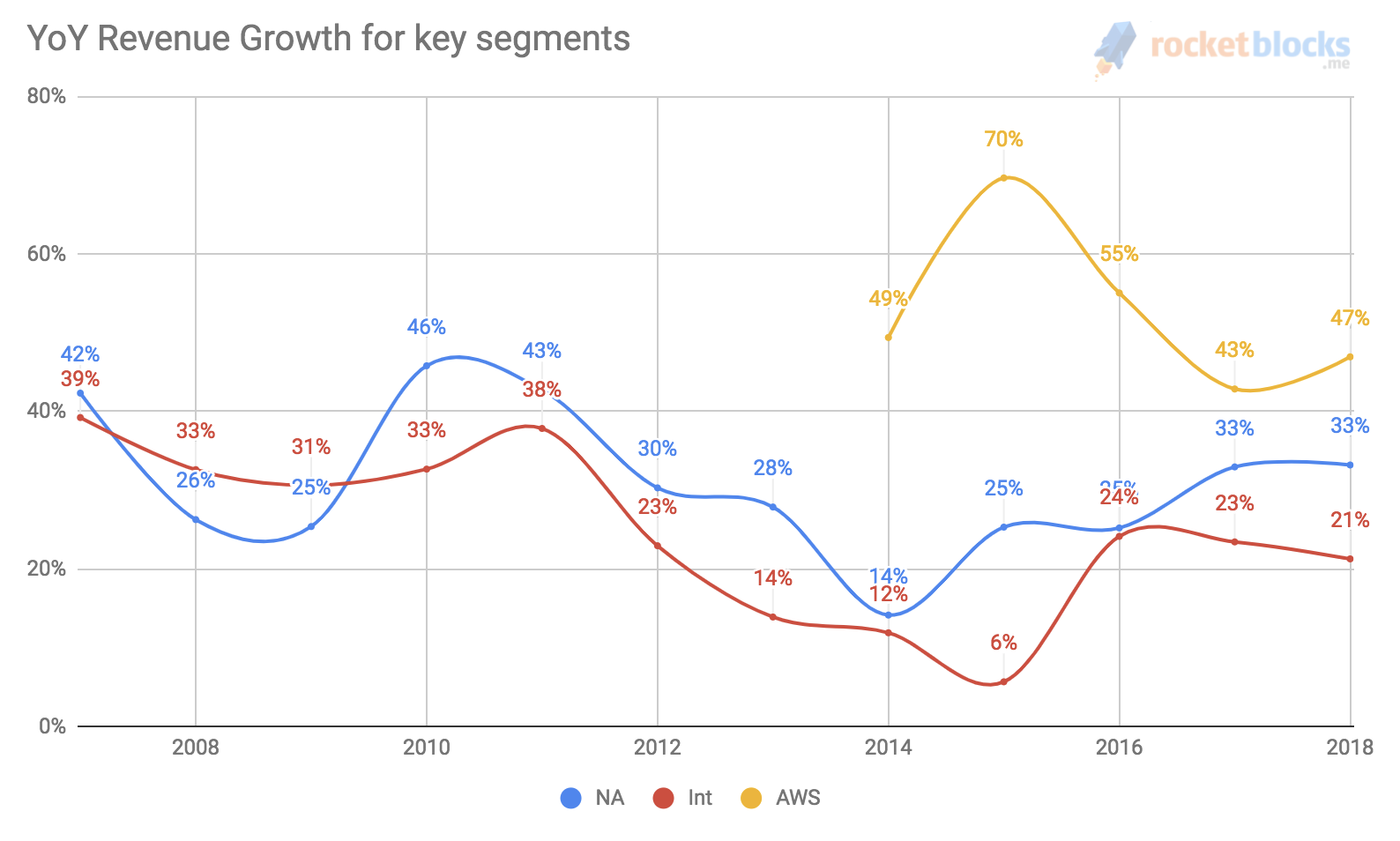 Given that Amazon's core business is online retailing, it's worth zooming in on quarterly numbers to understand how seasonality impacts their sales.

The answer is simple: seasonality has a dramatic impact - spiking Q4 revenues annually. 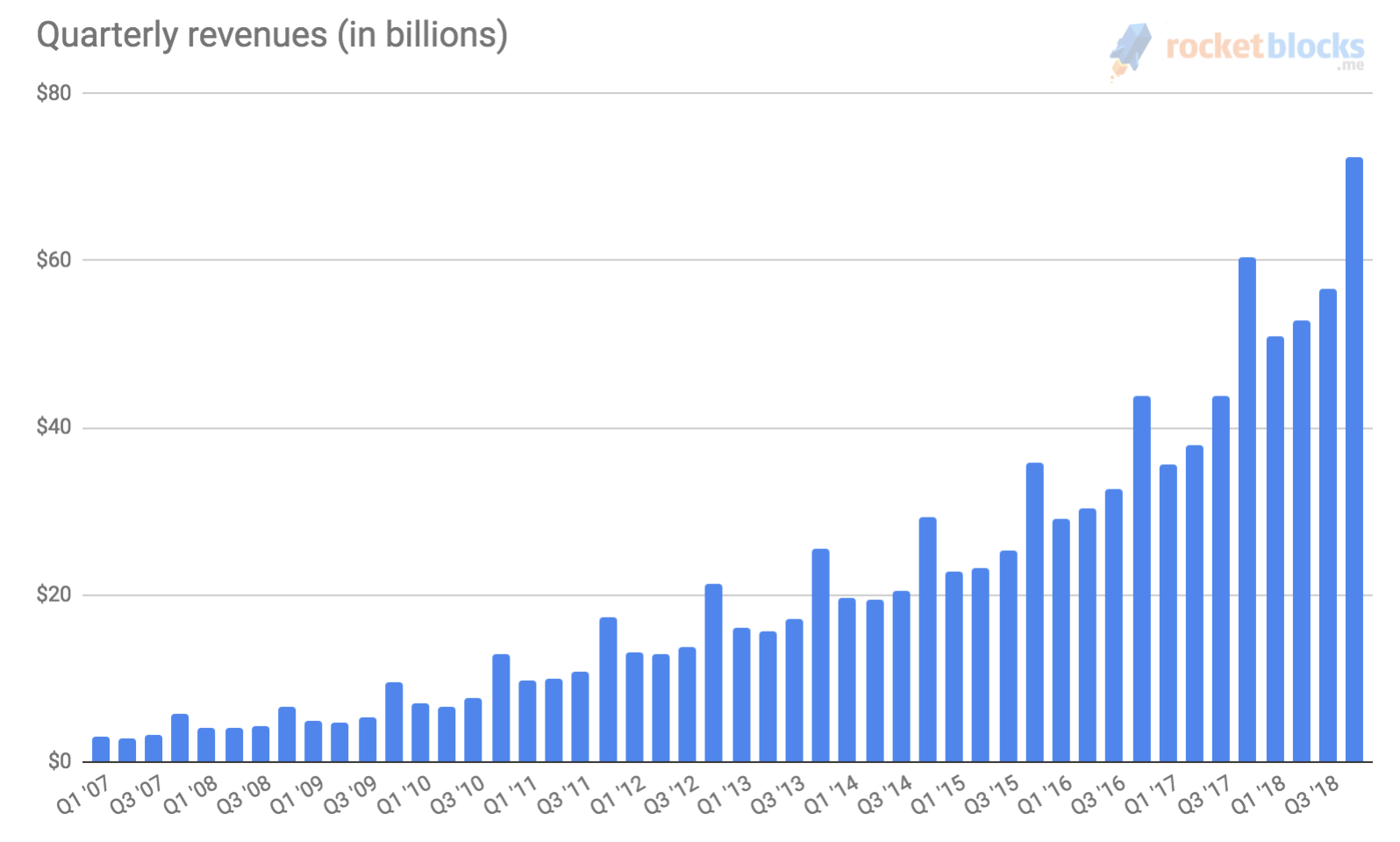 If we plot the quarter-over-quarter growth rates (see below), we can visualize the impact of retail seasonality on Amazon's revenue trend over time. 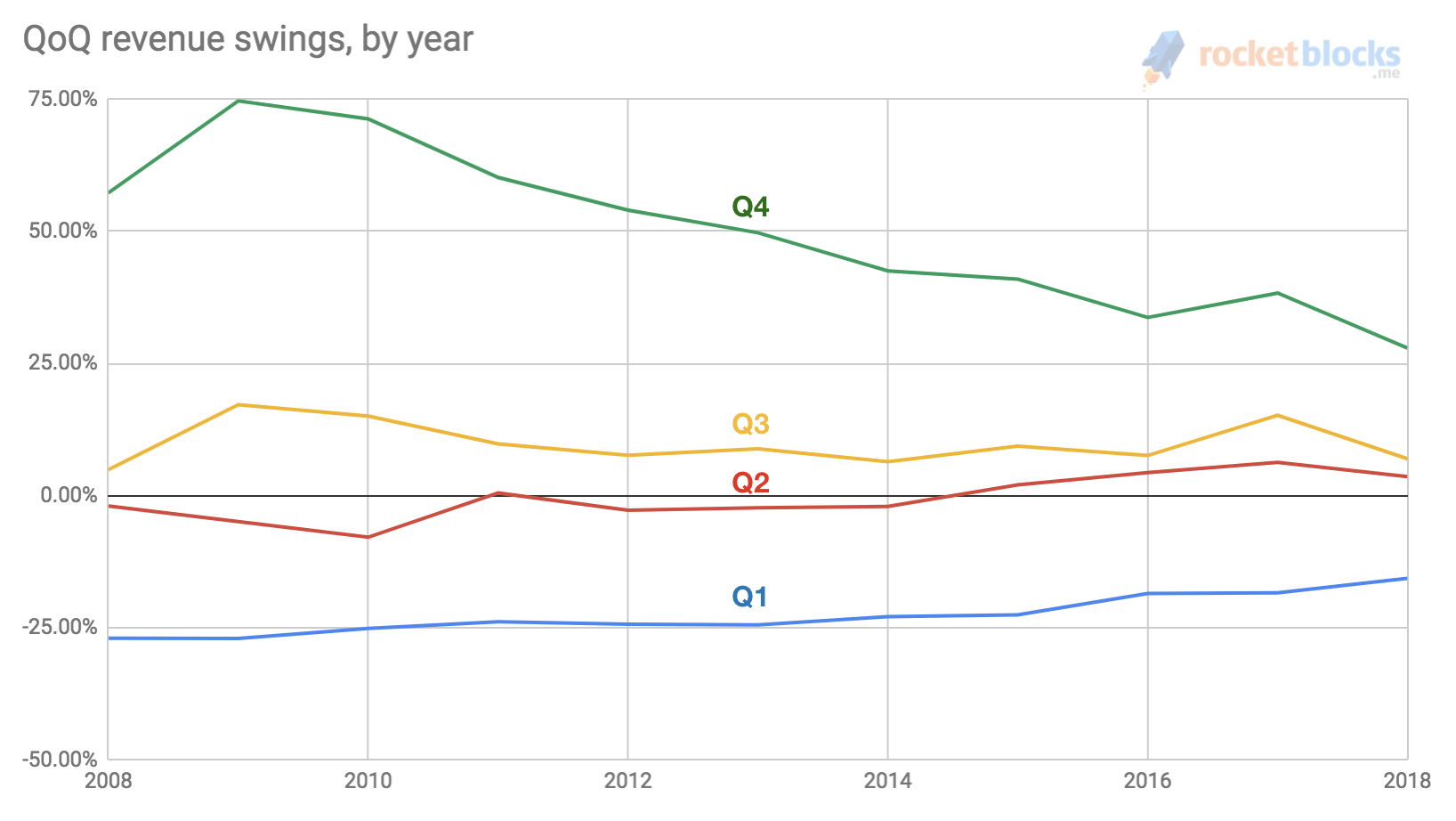 Zooming in on the smoothing out of quarterly revenues

What's driven the steady smoothing out of quarterly revenues? Two things: Amazon has entered new businesses that don't exhibit seasonality (e.g., you need Whole Foods groceries year round) and, to a lesser extent, Amazon has shifted buying behavior with things like Prime and Prime Day. 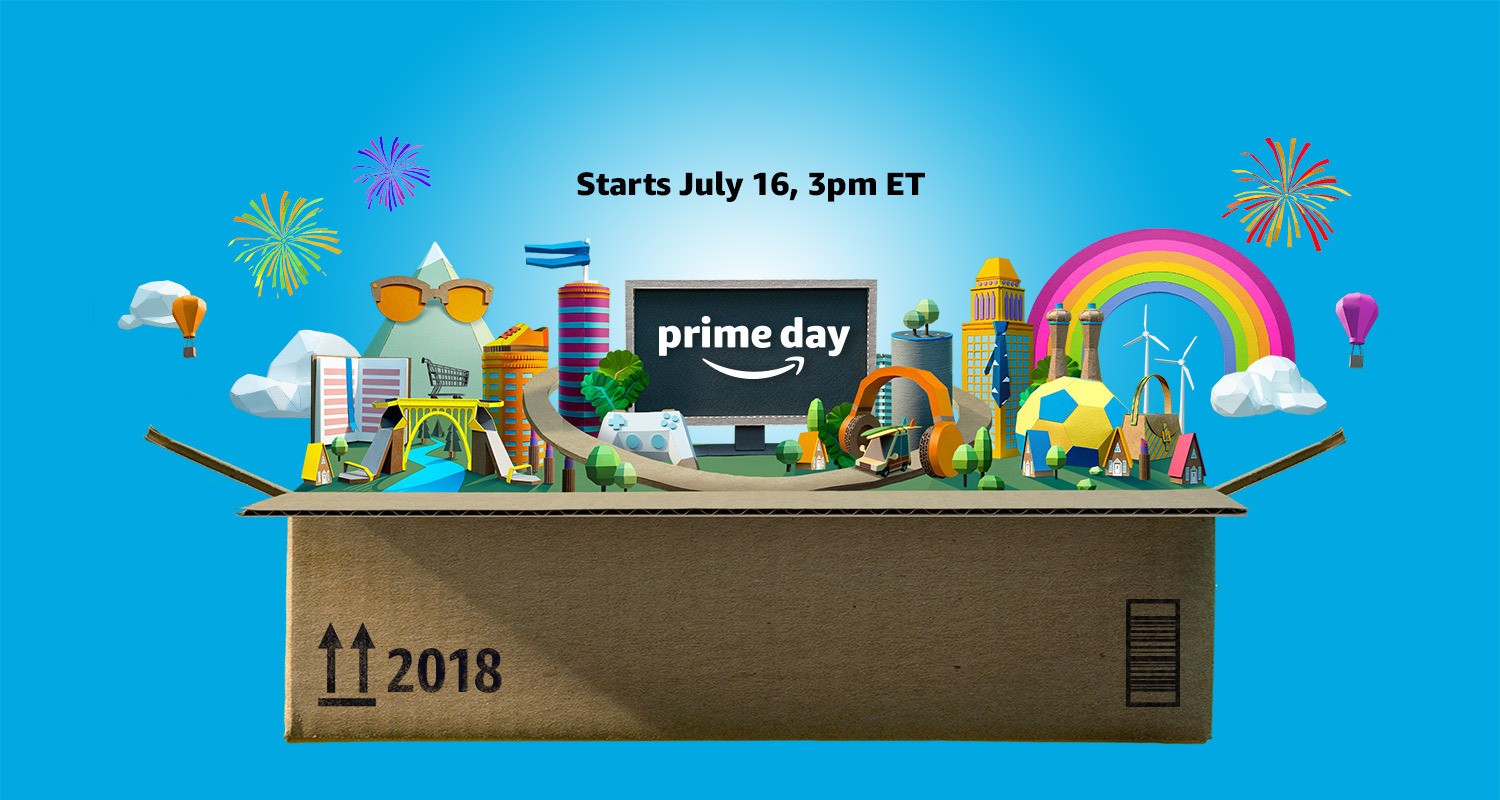 Since Prime reduces the cost of buying (e.g., free, fast shipping), it encourages people to use Amazon for regular purchases and not just holiday "splurge" spending. In addition, specific tactics like Prime Day, which strategically falls halfway between the Holiday seasons gets people spending in the off-season.

This is an important metric to look at for Amazon because it provides a sense of how many consumers they're "locking in" to their platform (since Prime membership often encourages customers to give Amazon first preference before looking elsewhere).

To do this, we utilized Amazon's single public statement about Prime members numbers (they announced 100M subscribers in April, 2018) and combined it with market research on Prime growth to triangulate their growth curve. 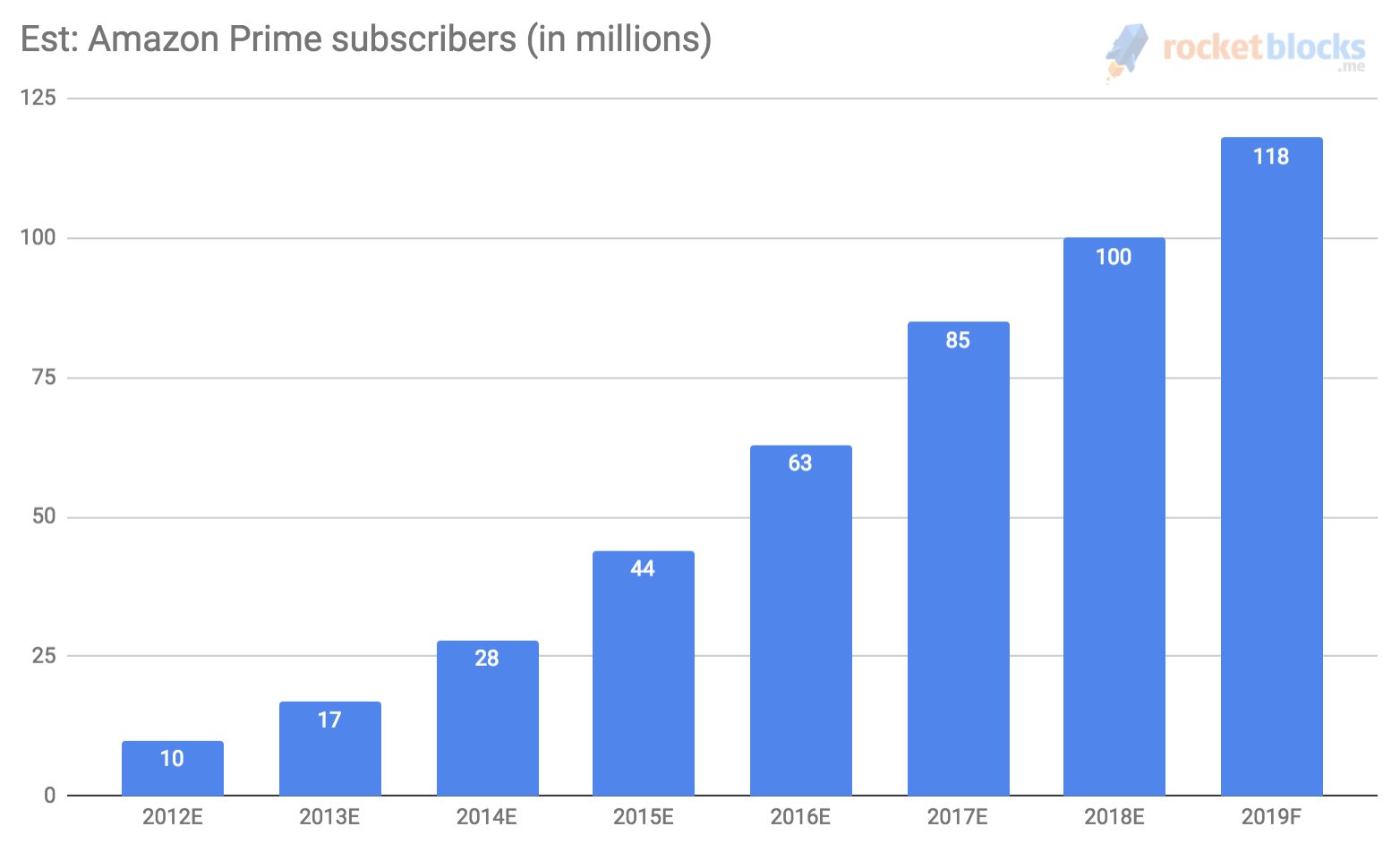 Summary and next steps

Amazon's scale and success to date is staggering.

Understanding how the company has grown over the years, both organically and inorganically (acquisitions) is helpful context on the company's trajectory and the key challenges its product manager core will face in the future.

Finally, a good next step is digging into the operational philosophy they used to drive this success: 14 leadership principles Amazon tests in their product manager interviews.