Today, Andy Jih is a Product Manager at Stripe.

Before that, he wore the PM "hat" at Zynga, TaskRabbit and Remedy Labs. But if you rewind the clock a decade, a career in product management wasn't even on his radar. Andy's first career ambition: be an audio engineer at a gaming company. 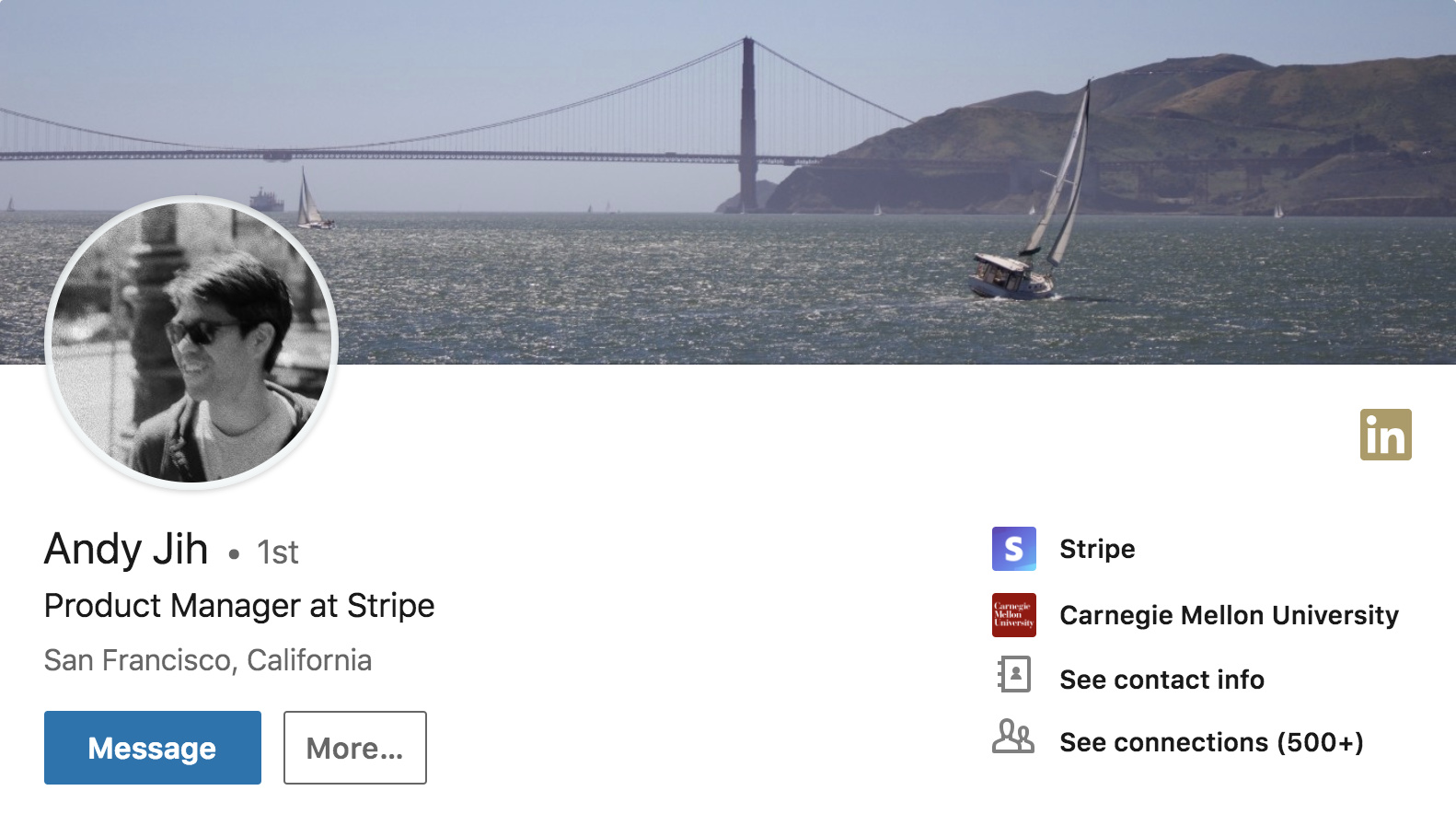 In this post, we'll hear about Andy's winding path into product management - from studying to be audio engineer in his early days at Carnegie Mellon's Entertainment Technology Center (ETC) to launching payments products at Stripe.

Andy Jih: When I was starting my career, the plan was to be an audio engineer.

Kenton Kivestu: An audio engineer? Why?

AJ: I studied philosophy in undergrad but, eventually, it became clear that I needed a job and surprise, surprise there weren't a ton of people hiring philosophy undergraduates.

Plan B was "Hey! I like video games," so I thought I could turn that into a career. I also had a musical background (I played the violin and had experience as a recording engineer while in school), so I figured that would be my "in" into the gaming industry. So I went to grad school at the Entertainment Technology Center (ETC) at Carnegie Mellon with the intent to be an audio engineer at a gaming company.

KK: What happened next?

AJ: At the ETC, the work was highly collaborative and required interdisciplinary teams (e.g., game prototyping with an artist, a designer, a software engineer, a sound designer).

I realized that I had an affinity for "keeping the trains running." Essentially, I was the one making sure we had a clear direction, were hitting our milestones and operating well. Thankfully, someone told me that the gaming industry had a role just for people like that: a producer.

KK: Ah! So did you switch tracks to a producer focus?

Yes, I veered into the producer track. My first internship was at Electronic Arts (EA) working on Command & Conquer. After school, I joined a small gaming company in Pittsburgh as the second producer and subsequently co-founded a gaming company called Evil Genius Designs. At Evil Genius, my title was Head Producer, but in reality, I just did anything needed to keep the ship afloat. Unfortunately, Evil Genius went under.

Discovering the role of product management

KK: Was this when you looked into product management?

AJ: No. I didn't even know what a product manager was!

After Evil Genius, I was unemployed and needed a job. ModCloth needed a Project Manager - which is basically what a producer is - and I needed the job, so I took it. And that's where I learned about *product* management.

KK: Tell me more about that discovery.

AJ: Up until that point, every game I'd worked on was packaged software. You make a product, package it, ship it and sell it. After that, you really have no idea how consumers engage with it.

ModCloth was different. It was a live product. I got to see how PMs conceived of a feature idea, then launched experiments to test it and iterate on it. I thought seeing how users engaged with the product was fascinating. After that, I knew my goal was to get back into gaming in a PM role.

Transitioning into a PM role at Zynga

AJ: I started as a producer at Zynga, but I knew I wanted to transition into product management there. I knew it was going to be a tough environment, but it had this reputation as being a best-in-class product management company, especially in terms of analytical thinking.

KK: How did you make that transition?

AJ: It was an active conversation I had with my manager and the director of product on my team.

Basically, I proved myself as a capable producer and I expressed my interest in shifting to product management. Because I'd earned trust in my current role and built a rapport with the team, they gave me the benefit of the doubt. I went through a mini-loop of PM interviews - which I thought went poorly - but apparently, it wasn't all bad because I got the opportunity.

It wasn't a clean break though. I had to finish up some projects as a producer but, over time, I got to take on more and more work as a PM.

KK: Was it all it's cracked up to be?

AJ: Ha! There was no buyer's remorse. There are always downsides to any role, but Zynga helped me develop my quantitative and analytical PM skills. It was very much the type of work I wanted to be doing.

After Zynga, I worked at TaskRabbit and Remedy Labs. Ultimately, I got to expand my scope as a PM - I became a director at TaskRabbit - but the scale of the PM teams at both places was small. When Remedy was winding down, I was craving a PM peer group to work with.

Stripe was really appealing for that reason. Plus, Stripe was doing really well and I'd been a happy Stripe customer at TaskRabbit and Remedy, so I was familiar with the product as well.

Make your own PM opportunities (Top)

AJ: What I learned is: you need to find and make your PM opportunities. In general, people appreciate ambition and proactiveness, but I think that both of those attributes are particularly valued in PMs.

Rarely does anyone just hand you a product and say: "optimize for X." To succeed, it's often about seeing opportunity where others don't and seizing it... so by seeking out opportunities to do product work, you are essentially product managing your career!

KK: How do you set yourself up to seize those opportunities?

AJ: First step: begin earning trust in your current role. Prove you're great at that job. When you raise your hand to take on different types of work, people are more likely to pay attention.

The key thing is that there isn't some magical PM track. I talk to a lot of people who think they need to be an engineer first to become a PM. They've got this idea that if they're an engineer, then get an MBA, they can be a PM. But that doesn't make sense to me - if you want to be a PM, just go for it!

KK: How do you approach a PM interview?

AJ: There are two approaches here: 1) you aim for being the fully-rounded PM and figure out how to round out your weak spots, or 2) double down on your own strengths and find a PM role that uniquely suits what you're great at.

KK: On approach number two, if you're incredible at X but can't do other key things, does that really work?

AJ: Well, there are some baseline skills you need across the board to be a PM.

KK: Are they all equally important?

AJ: No, you need communication skills more than anything else. It doesn't matter how brilliant your product ideas are if you can't communicate your ideas to anyone else on the team.

How technical does a PM need to be?

KK: OK. Talk to me about the technical component. How technical does a PM really need to be?

AJ: This is tough. I think you need to know enough about the technical stack and application logic to be informed about trade-offs the team is making.

One thing is clear: you don't need a CS degree. But you should be able to think about things like data models, state machines and application logic. So it's admittedly an odd balance.

KK: I also find this balance extremely tough to articulate.

AJ: Yeah, to provide a little more color, the types of questions engineers are usually asking me are: what are the edge cases? What are the different states the user could be in? And when does a user transition from one state to another? If I'm going deeper than that, I wonder if a tech lead should be weighing in on that.

KK: What about for the interview itself? How should someone prepare?

AJ: It helps to practice.

If it's a good interview question, there isn't going to be a clear cut answer. What the interviewer is looking for is whether you can take an ambiguous prompt, structure it, make assumptions and drive through the process.

KK: There it is again: proactiveness. I think this is a theme in your journey and advice to others.

AJ: Yeah. On the job, no one is going to tell you to do it. You'll have to say, "Hey, this a problem. We need to fix it." The best product management candidates demonstrate that in interviews as well.

Summing it up (Top)

Putting it all together, here are our three key takeaways from Andy's journey into product management.

Finally, if you're considering a career in product management, we encourage you to check out our Getting started guide, which is chock full of insights from PMs at companies like Google, Amazon, Stripe, Facebook, Twitter and more. To keep up with Andy's journey, you can find him on Twitter @andyjih.