What is a written case interview?

An overview of the new format Bain and BCG are utilizing

While the skills tested are similar, the written case format is unique. Instead of assessing a candidate in 45 minutes or less (like a typical case interview), written case interviews run about 2 hours or longer and give the candidate a chance to demonstrate their skills while mimicing the exact work consultants do: absorbing large amounts of data, running analyses and presenting their findings. 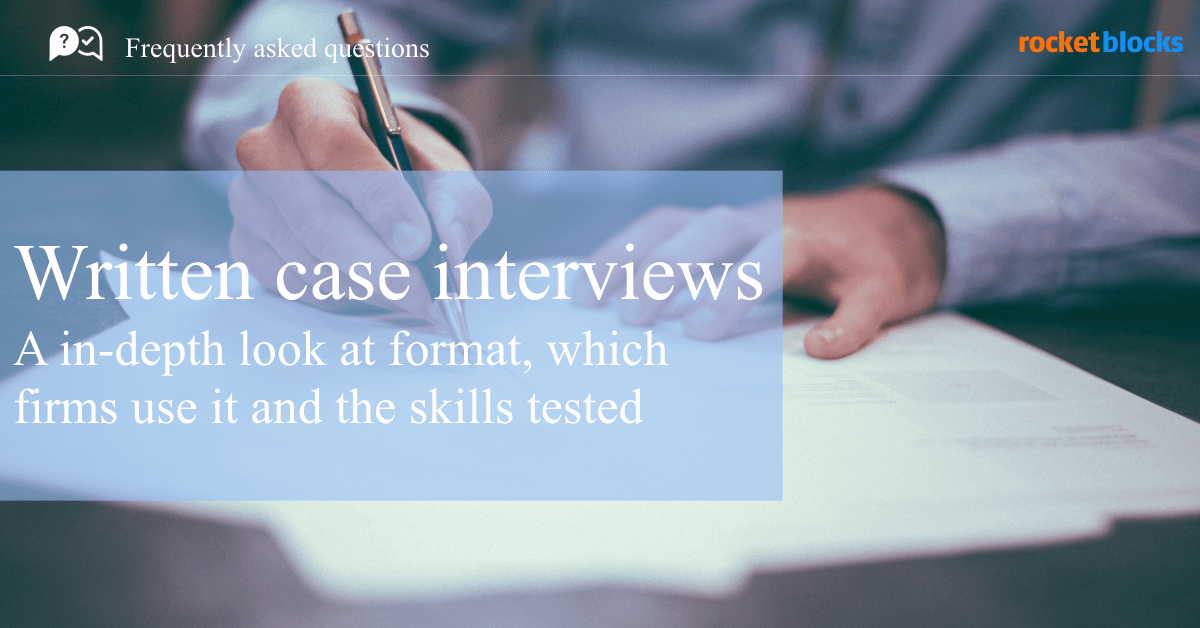 In this post, we'll get you up to speed and cover all the basics:

Overview of the written case interview

At its core, a written case interview is one where the candidate is given a set of materials (e.g., data and slides), a specified amount of time to review the materials and do analysis and time to present their findings to a panel of interviewers.

Currently, the written case is an interview format used primarily by Bain and BCG. Although it is less common than typical case interviews, the format has been gaining popularity recently, especially in the second round interviews of post-MBA consulting roles.

Since the format is newer, it's important to note that its not universally used (e.g., undergrad applicants don't typically have a written component) and use can vary from office to office.

For example, Bain's Sydney office may have slightly different recruiting norms than Bain's Atlanta office. That said, we highly recommend preparing for both types of interviews, as you don't want to be caught off guard and the two types of preparation will enhance your overall ability and confidence with cases in general.

So, what can you expect in terms of the format?

Overall, the two firms have very similar formats for their written case interviews. This isn't surprising, as both companies are trying to test similar capabilities, which we'll get into below. That said, Bain's written cases tend to be the shorter and more structured of the two.

For both, you'll be given a problem to answer along with a stack of printed materials to review (e.g. powerpoint slides, industry reports, or market research). You'll have a set amount of time to prepare your answer to the question in written slide format, using data and supporting evidence from the documents that have been provided. At the end of the allotted time, you'll be asked to present your slides to your interviewer, who may ask additional questions, push on certain assumptions or debate aspects of your argument.

Here's how the two firms' specifics stack up: 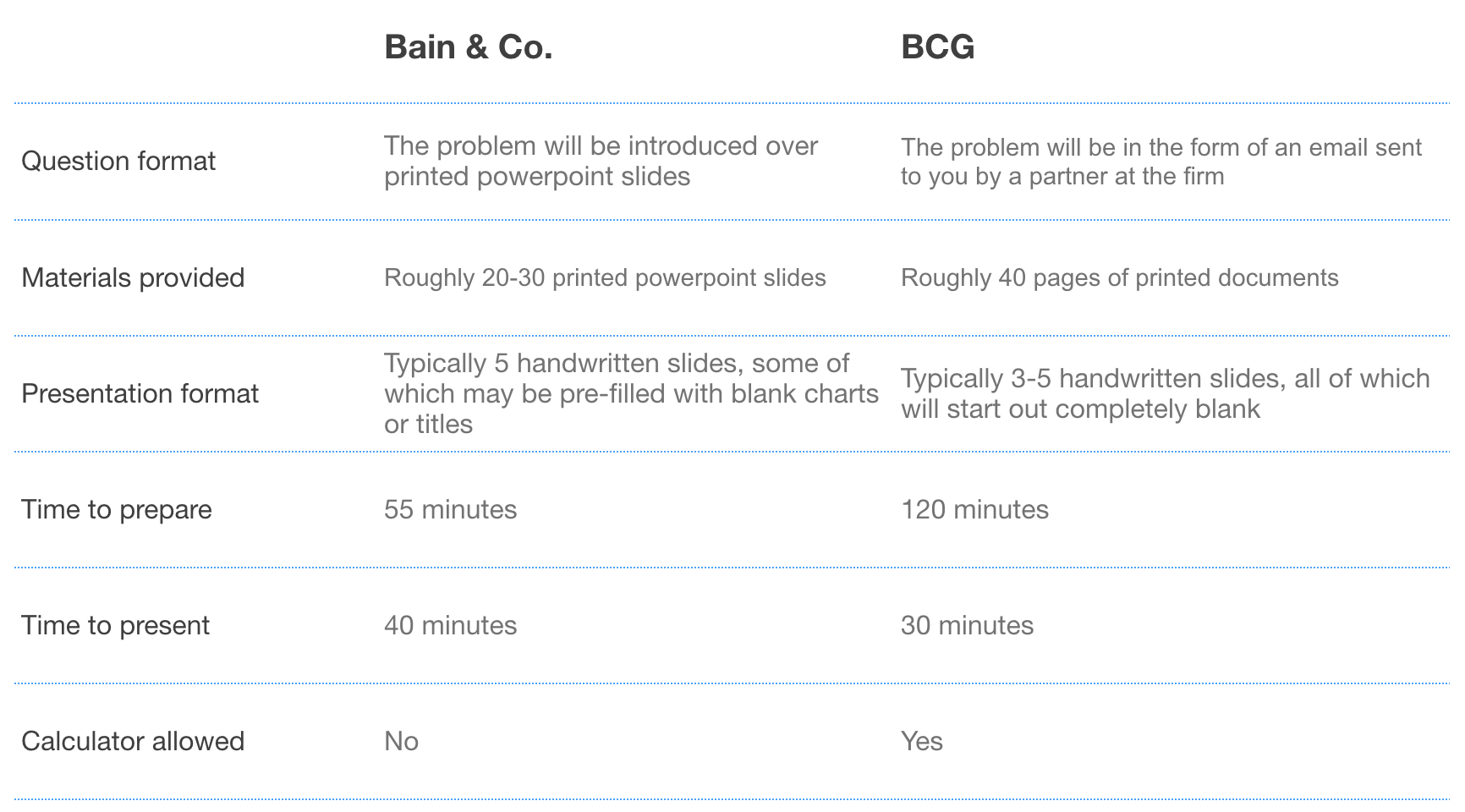 As you can see, the presentation format is one of the biggest differences - Bain gives you a bit of a head start by pre-filling some of the slides they want you to create. On the other hand, BCG gives you completely blank slides, so you'll need to decide how many slides to make and what to put on each one. This is likely why BCG allows more than twice as much time to prepare.

One additional consideration - neither Bain nor BCG will allow you to write or take notes on the materials that are shared, so it's a good idea to follow this same rule when you're practicing. You will be able to take notes separately, but can't mark the documents directly as they are reused by multiple candidates.

What's different about the written case interview is it tests your ability to produce work under time pressure, tell a cohesive story, and persuasively present your argument. It also requires you to sift through lots of data to pull out what's truly important and drive towards a hypothesis. Unsurprisingly, these are all essential skills for a consultant and the written case interview is designed specifically to see how a candidate will perform in a "on-the-job" scenario.

During the interview, you'll be evaluated across several areas:

Common pitfalls and how to avoid them

There are several areas where people often get hung up on the written case interview - don't fall into these same traps! These are the four pitfalls to avoid:

We can not stress this point enough - make sure you have a crystal clear understanding of what question you're trying to solve before you begin. Read the question at least twice and keep referring back to it if you need throughout the session. You can't get time back that you waste on answering the wrong question.

You will intentionally be given more material than you will have time to read through. If you jump right into the documents without a clear plan, you will waste precious minutes going through irrelevant data. Instead, pretend you're working through a standard case interview and take a few minutes to think about how you would structure your approach, what pieces of evidence you would need to build an argument, and then start combing through the materials with a clear purpose in mind.

Failing to tell a cohesive story

Interviewers are looking for you to come in with a concrete answer and present supporting evidence to back up your position. The way you organize your thoughts on the slide is just as important as your content. Make sure each slide title has a point and that the presentation as a whole flows logically. Don't forget to summarize your recommendation at the end.

Missing the "So what?"

Most interviewers have probably given these cases numerous times - so you'll need to go beyond getting the basics right to stand out. Push yourself to think about the "so what?" implications of your findings and don't shy away from injecting a little creativity into your answer.

This could be going a level deeper in your summary, touching on potential risks down the line, or calling out areas you might want to look into if you had more time.

Now that you know what to expect from a written case interview and what your interviewer will be looking for, what's the best way to prepare so you can ace it?

First, review the sample materials that Bain and BCG provide online to familiarize yourself with the format. When going through these, try to simulate a real interview environment as much as possible, including practicing your presentation live with someone else.

Second, dedicate some preparation time to learning what a good slide looks like, including effective titles, formatting and use of charts and data. Here's an example from a BCG deck on China and another example from McKinsey on digital globalization.

Finally, leverage your standard case interview practice - the structured problem solving approach will serve you well in the written case interview as well!