What is the new McKinsey & Co. digital assessment game?

McKinsey has launched a new digital assessment game that candidates are taking in lieu of the traditional problem solving test (PST).

In contrast to the traditional multiple choice, business case oriented PST, the new McKinsey game lets candidates explore a natural environment (e.g., think an underwater reef or a jungle island) and go through a series of problem solving exercises over a sixty minute session. 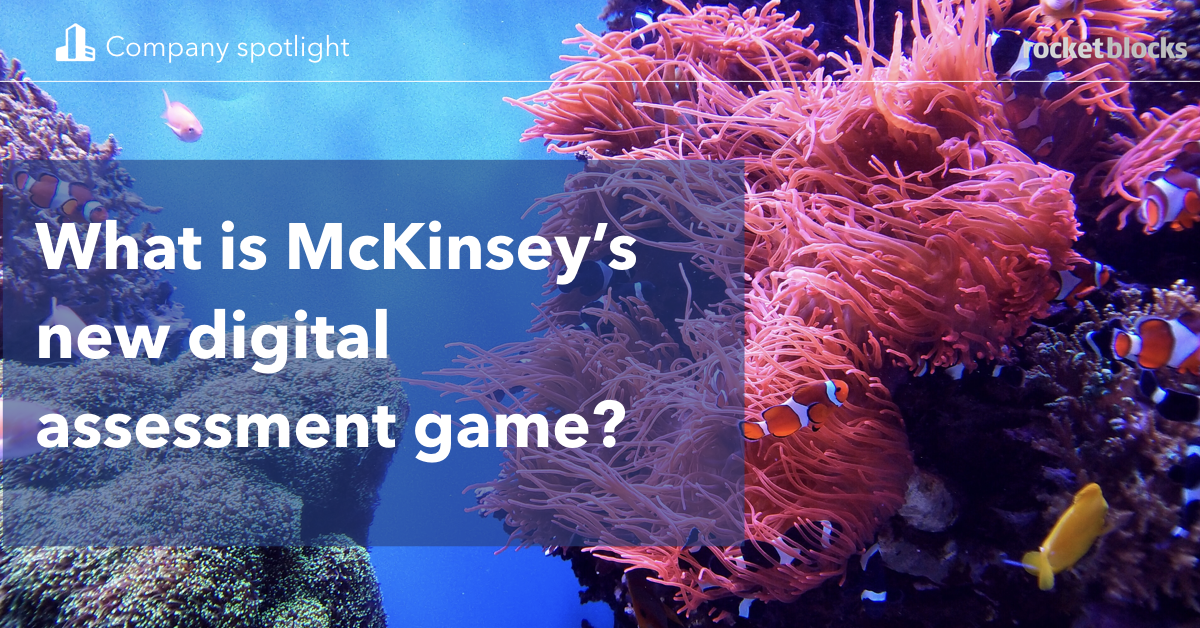 Here's how McKinsey & Co. describes it:

Imagine yourself in a beautiful, serene forest populated by many kinds of wildlife. As you take in the flora and fauna, you learn about an urgent matter demanding your attention: the animals are quickly succumbing to an unknown illness. It’s up to you to figure out what to do—and then act quickly to protect what you can.

The game and software itself was developed by Imbellus, a relatively young startup founded by Rebecca Kantar, that helps companies measure candidate potential.

What does the McKinsey Digital Assessment evaluate?

Similar to a case interview, the McKinsey digital assessment is designed to measure both the results a candidate achieves and the process he/she used to achieve them.

Players' actions within the game are recorded but, additionally, the game collects detailed "keystroke" records which show what data players looked at, what he/she did before and after a decision and how long he/she spent on each component.

Ultimately, after every player finishes the game, Imbellus is able to assign two scores: a "product" score, which measures how good the result was, and a "process" score, which evaluates the player’s decision making during the game.

For obvious reasons, McKinsey & Co. is interested in both scores. A good result is great, but only if the process that led to it was logical, repeatable and not just driven by luck.

Who has to take the McKinsey game test?

Right now, McKinsey is still in the process of ramping up usage of the Imbellus game. However, a significant number of 2019 applicants were asked to take the test and the firm has publicly stated their intention to ramp up usage significantly in 2020.

What will happen to the traditional McKinsey PST?

At this moment, it's unclear but it doesn't look like it will last, at least not in its current form.

McKinsey & Co.'s head of people analytics, Kevin McNulty, noted in a recent post that one of the key downfalls of the existing multiple choice PST is that: "Recruiting only knows if candidates got the right answer, not how they approached the question."

In addition, he noted that "there's a large amount of strategy, preparation, and luck involved in multiple-choice tests, and if you use them in the selection process, it reinforces the status quo—at a time when you are looking to widen the scope of candidates you're hiring."

This last point is important. As McKinsey moves beyond hiring primarily MBAs, it's important that their candidate screening techniques align with their hiring needs. For example, if McKinsey wants to ramp up hiring of engineers and designers, but those candidates are unfairly penalized by the traditional PST test, McKinsey will miss it out on strong talent due to a poor filter.

What are candidates saying about the McKinsey Imbellus test?

Overall, the impression is that the test is completely new - it's not like anything else candidates have seen in the recruiting process before.

While you don't have to be a gamer to perform well, the game will certainly test your problem solving skills, force you to think on your feet and, at times, adapt your thinking and pivot.

For more details, check out the overview McKinsey put together: