A PM mock interview featuring Allen Yang, ex-Google PM and current VP of Product at Bubble, answering the question: what's your favorite product and why?

Favorite product questions are a super common part of the PM interview process. It is a key opportunity to share your knowledge of a specific product, highlights points of improvement and showcase your overall approach to product management. 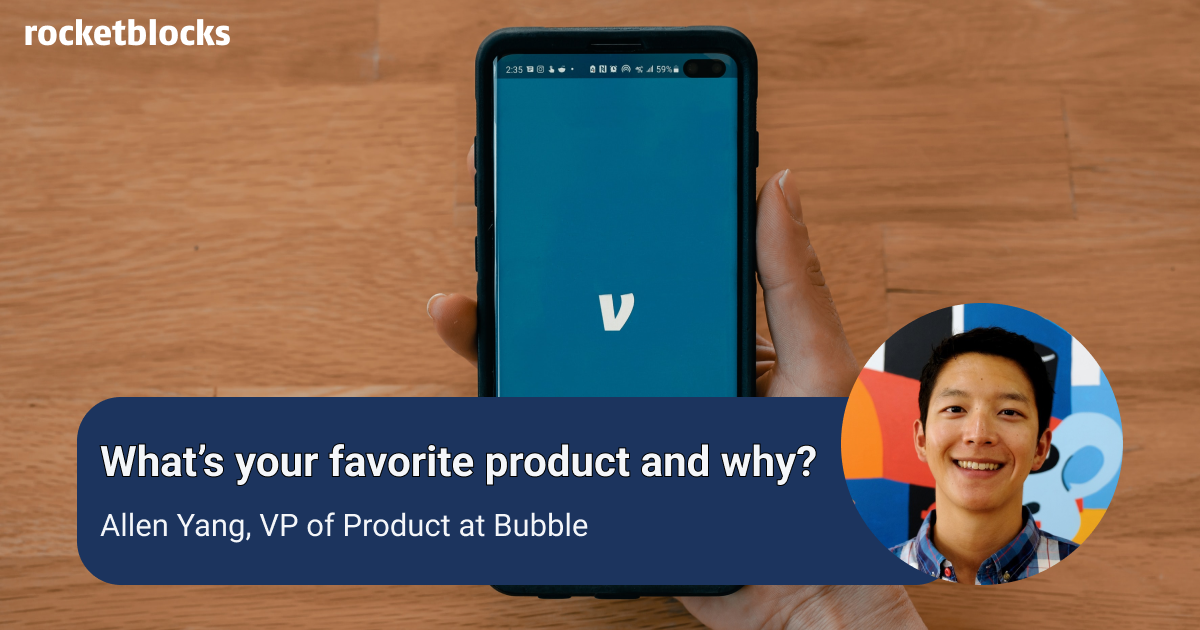 In this mock interview, Allen Yang, ex-Google PM and current VP of Product at Bubble, plays the candidate and Kenton Kivestu, RocketBlocks Founder, plays the interviewer.

Kenton Kivestu [Interviewer]: So let's get into it. What is it your favorite product and what in particular do you like about it?

Allen Yang [Candidate]:Yeah, sure. So I would love to talk about Venmo. I chose Venmo because I think it is just a really elegantly designed solution to a particular particular problem. So the use case for Venmo is transferring, I would say, smaller or more day to day amounts of money between people. This distinct from the use case of transferring larger amounts or paying larger bills. So for that, you have wires and auto pay from your bank account, and things like that. But the use case Venmo is trying to tackle is really day to day. You're interacting with people and maybe you're splitting a meal or you have a roommate and you need to split expenses with them, and Venmo tackles that particular use case pretty well.

So if we think about the target user of this, It's definitely not an enterprise B2B kind of a product. It's really for people who might be engaging with other peers on a more frequent basis. So I would guess that their user base possibly skews a little bit younger. So, for example, college students are like constantly interacting with peers, probably splitting costs, things like that. I would even maybe go a step further on the filtering and say, this is not really even a tool that you would necessarily use with your partner or your spouse, right? Because those folks probably have joint bank accounts or something similar. So it's really for folks who are interacting with their friends or peers in those kinds of situations, and you would use it when you need to. Like splitting meal costs or maybe you need to pay somebody back because you're in kind of a roommate relationship.

AY [Candidate]:So that's the target use case. And again, the reason I chose Venmo is that the product just seems to fulfill that use case very well.

I also appreciate the simple design. I don't mean simple in a pejorative way, but they just fulfill it very well. So, at its core, you can transfer money digitally from one person on Venmo to another person. You can connect Venmo to a bank account so that you are able to easily sweep money from your Venmo balance into your bank account. If you don't have enough money to pay somebody on Venmo, it will automatically withdraw it from your bank. It's all pretty seamless, and they make the UI pretty clear about where the money is coming from and where the money is going. You can also find people pretty easily. You have the choice of username. I think you can search through their phone number. I think even now they have this little QR code so that if you happen to be in person you can scan the other person's QR code.

I will say that the social side of Venmo is not something that I think is really core would be my guess. I'm not fully sure what the thinking was behind it. I think it's been there for a while because having a social feed of publicly visible payments, it's not something that I would have thought is necessarily super tied to the core use case. But I know that they used to run some kind of a referral campaign where you get a dollar if you refer a friend, and if you publicly post that on the feed, that can build a little bit of buzz. So those are all things I liked about it.

KK [Interviewer]: So if you were working at Venmo, what are one or two improvements you would suggest?

AY [Candidate]: Thinking about some of the use cases I mentioned, there are sort of the one off payment use cases, like splitting a meal at a restaurant. But I think Venmo is also being used by a lot of folks in the target demographic to split recurring expenses. So if I were working on Venmo, I would think about looking into that idea - how can you better facilitate recurring transfers from one person to another?

AY [Candidate]: So roommates splitting rent is a big example or any other kind of apartment related, recurring expense that's the same amount every month. If you think about the user experience, you would probably want to do things like show somebody a warning a couple of days before the recurring expenses is about to pop. Maybe you have an option of adjusting the amount on a one off basis. I don't think it's the next frontier of payments, but I think it's a potentially a very utilitarian feature that ties well with some of the use cases for Venmo.

KK [Interviewer]: Yeah, I could definitely see that making sense. I remember the pain of having to constantly write out a check to my friend who was paying the rent on behalf of me and roommates for years. So I know that well.

Just a few quick follow up questions on some of the elements you mentioned. So I think at the beginning, you said Venmo is quite elegant at what it does. I'm curious if you think about PayPal as sort of one alternate option or Square Cash as an another alternate option. What is it about Venmo for you, that is special or beats it out in your mind that you would go with Venmo versus some of those other options?

AY [Candidate]: That's a great question, because I think at least today, I believe you're right that those those other products have basically the same features. Where you can accomplish the same goal. I'm going to guess that the UI and UX for Venmo does seem a little bit smoother or more modern, or maybe more mobile first compared to PayPal. That makes a little bit of difference but might not explain the market shares, necessarily. I would honestly bet that the difference in popularity might be just their histories and how they went to market. It feels like Venmo pursued a mobile first strategy and went after a particular age range of users, especially in the college sort of demographic. That was great, because it is a market where you can spread a little bit more virally because you have all these college students who are like, "oh, do you have Venmo?" Whereas Paypal, I think, began more like an eBay kind of context or maybe one person paying a business kind of a context. Also with Square, there's some kind of B2B or B to small business kind of route there. I don't know the history too well but that's a good question.

KK [Interviewer]: I think your insight around go to market probably explains a lot of that difference. I remember seeing Venmo as it came out and my default application to solve that use case before that had been PayPal. But Venmo's big pitch at the time was two things that I recall. At least one was it's designed for mobile first, and especially at that time, the Venmo mobile experience was much better than than PayPal on mobile. I think PayPal's caught up. I actually never used PayPal on my phone, so I'm not really sure.

I think Square Cash from a mobile perspective, my sense is that UI is pretty nice. So I think that was one thing was they just came out with mobile first at a time where PayPal was caught flat footed on that. So I agree with you there. I think that social feed thing as well, you alluded to this earlier, may have created buzz and appealed to a younger demographic.

In reviewing Allen's answer to the favorite product question, here are some of the key pieces of feedback:

I liked how Allen started out by clarifying the key use case Venmo is trying to tackle: small, day-to-day payments between peers and the key audience that they're trying to attract: younger folks who have lots of small, split costs. This works well because his appreciation stems from them meeting this use "very elegantly."

Allen does a great job of hitting on the key features Venmo offers to meet the core use cases. He also acknowledges that the social aspect of Venmo snd rightly questions whether it's really helpful for the core product or is part of a legacy growth strategy.

Allen's proposed feature extension - facilitating recurring payments - is logival, albeit not the most exciting (which Allen admits too). The main trap you want to avoidhere is proposing a feature which is totally infeasible or wouldn't provide value to their users.

Finally, if you're considering a career in product management, we encourage you to check out our Getting started guide, which is full of insights from PMs at companies like Google, Amazon, Stripe, Facebook, Twitter and more.