And yet, while those companies have thousands of PMs, it's only a fraction of the whole story.

Demand for PMs is growing and diversifying

Increasingly, non-tech companies (e.g., companies who gained scale prior to the ubiquity of software and internet availability) are hiring PMs to help them make the transition into a software-centric world.

Ultimately, this is a defining trend that will have a profound effect in the next two decades: every company will integrate software into their business models to survive. To do so, these companies will need a collective army of PMs to manage that process.

Types of companies that hire PMs

You can think of the groupings of companies which hire PMs in three main categories: 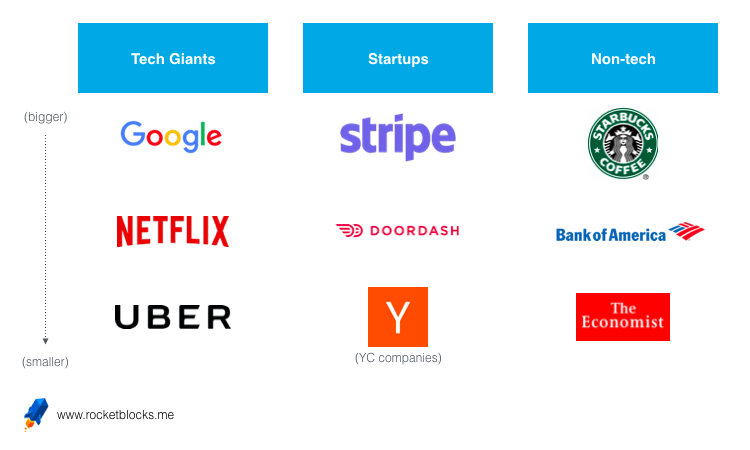 Each of these companies has hundreds, if not thousands of different products offered, and they staff PMs against most of them to manage them.

While Google, Amazon and Facebook employ thousands of PMs, they aren't the only game in town. A crop of exciting, fast growing deca-corns (private companies valued at over $10B), like Uber, Airbnb, WeWork, Didi and smaller public tech companies et all, hire large ranks of PMs as well.

Startups of all stripes hire PMs.

Warning! While startups hire PMs, this category of PM job is the most variable from company to company and, as a result, can be difficult to navigate.

Why? Well, startups are, by their very nature, young, fast-evolving and unstable businesses. Even though a startup might have traction, the company is typically focused on doing whatever it must do to survive day to day. As a result, the PM role, which already varies quite a bit even at established companies, varies dramatically from startup to startup.

Put another way: the variance of PM roles is inversely related to the size of the company.

In early stage startups, the CEO often acts as the PM. This drives variance in how the role evolves and dictates how long the company waits to hire the first "official" PM. As startups mature and the PM organization grows, the outsized CEO influence tends to wane but this can cause lots of variability, especially when the PM corps is still small.

Since startups are often in "survival mode," this all hands on deck status means PMs (and others) might find themselves doing tasks outside the typical description. However, given the natural variation in the PM role, a plethora of assorted tasks fall onto the PM's plate. The more established and stable a startup becomes, the less this should happen.

In many startups and product teams, the full complement of counter parts to a PM might not exist (e.g., no PMM or no data analyst), which means a PMs likely will take on additional responsibilities. In lots of cases, it will mean some tasks just go un-done but critical ones which don't have a principal owner often fall to the PM.

This is the new frontier of PM jobs.

Five years ago, leading companies outside of the technology sector, like Starbucks and Walmart, barely hired product managers. But today, that's changed significantly.

Today, these companies employ ranks of PMs to help imbue software into the core of their products (e.g., Walmart's mobile payment functionality or Starbucks' order-ahead capabilities.) 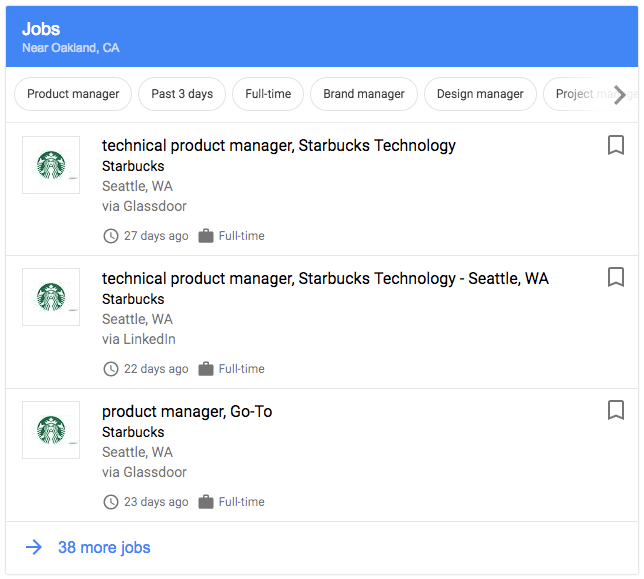 Many of the traditional companies offer PM roles that get to combine significant physical assets of the company (e.g., thousands of retail stores like Starbucks or a massive, varied customer base like JP Morgan Chase) with the potential improvements that software can bring to their business.

For example, if you've ever used Starbucks "order-ahead" functionality or deposited a check via your mobile phone, you've used incredible technology built by PMs at companies that aren't native technology companies. Large, established industry players often bring tremendous assets to the table and great opportunities for PMs to enhance them with technology.

The good news: if you're interested in a career in product management, you have lots of choices.

The obvious ones like Google, Amazon and Facebook provide great training grounds. However, they aren't the only game in town: growing tech companies, startups and non-tech companies re-orienting their businesses around software will provide lots of options.

Back Next: Career path